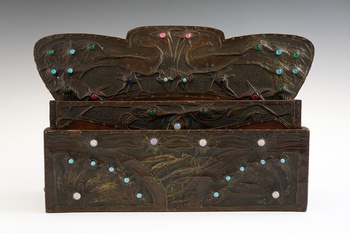 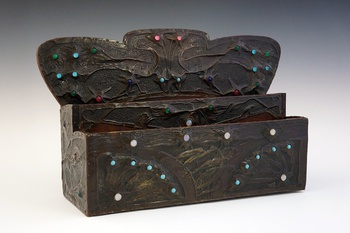 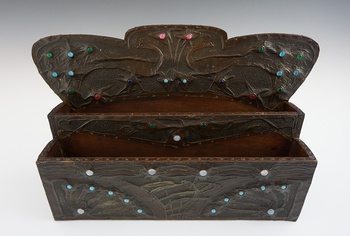 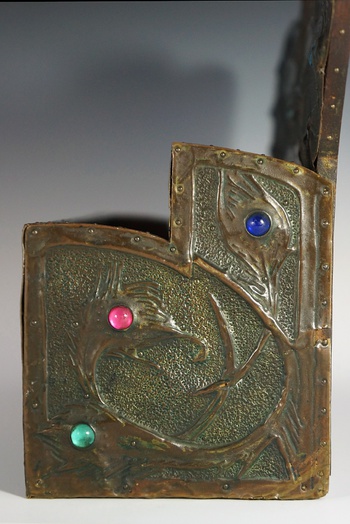 Alfred Daguet had a wonderful talent for transforming four simple materials - copper, brass, wood and glass cabochons - into organic, flowing examples of the Art Nouveau aesthetic. This ornate double pocket letter holder is a prime early exemplar of Daguet's unique talent. Raised copper panels are mixed with cabochons of turquoise and pearly glass to pull together a peacock design theme popular at the beginning of the Art Nouveau design period. The top panel of the letter holder has two facing peacocks, while the cabochons are reserved for the "eyes" of their feathers. Peacock feather motif is featured on either side of the letter holder, while the front facing panel has a star, flower and wind blown grass design. Underneath the opulence resides a simple wooden letter holder, perfect and utilitarian in function. Daguet's work embodies early British Arts & Crafts singular artistic production, French Art Nouveau opulence, and the dreamy internal worlds of 19th century Symbolists.

Alfred-Louis-Achille Daguet (Paris, 1875 - 1942). Daguet's early years are shrouded in mystery and little is known other than he was a pupil of Jean-Leon Gerome and Charles Clairin. In 1900, Daguet appeared quite suddenly on the Parisian art scene when his intricate metal works were exhibited by Siegfried Bing in his famed boutique L'Art Nouveau. A sizeable number of Daguet's works from this period are labeled, "Metaux S. Bing" or "Brass S. Bing," as if there were actually a special department for working metal or copper in Bing's gallery, but the real work was being conducted by Daguet himself in a studio directly above L'Art Nouveau. At the Paris Salon of 1903 and 1904, Alfred Daguet exhibited seven objects which were done in repousse' copper. For this exhibition Daguet gave his address as 22 Rue de Provence.

In 1905 Bing closed his gallery L'Art Nouveau, after which Daguet moved his metal studio to the Rue du Faubourg-Saint-Jacques where his clients included Sarah Bernhardt and the Barrymores, Maurice and Lionel. In 1910, Dauget exhibited at the Salon of the Societe des Artistes Francais metalwork in "modern style" and ten more in a "different style." One of his last dated works prior to World War I is a mixed metal mirror frame from 1912, which was owned by Sarah Bernhardt.