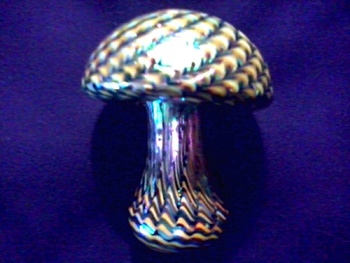 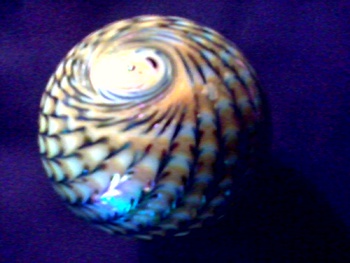 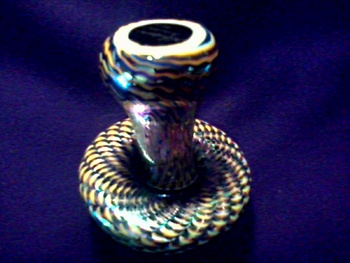 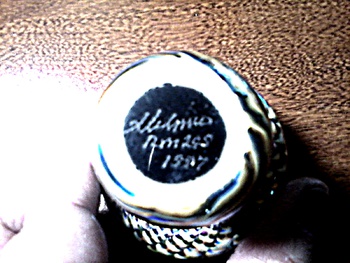 This was my prize find from Salvation Army today. Christi came through again and put this aside for me. It's a really beautiful little 3" Stuart Abelman mushroom paperweight. The colors shift in the light from blue to purple. A closer look shows it's mostly silver, gold and white but the iridescence creates the color shift effect. The pattern is almost like fish scales that swirl around the piece. Quite a stunner and I guess worth more than the dollar ninety-nine I paid for it. -Mike-

Stuart Abelman attended Carnegie-Mellon University receiving his BFA in painting and sculpture. He received his Masters of Fine Arts in Glass at UCLA. As one of the pioneering leaders in the art glass movement in the 1960’s, Stuart helped bring recognition and appreciation to what was an all but lost art form. His studio, founded in 1977, is highly respected in the art glass world and prized by collectors.
The work created at Abelman Art Glass is in demand not only for its technical expertise, but for its creativity and originality. His works are shown in galleries and represented in museums and private collections around the world. He has done commissions for the Hollywood Movie and Television Industries, Sunset Magazine, the White House, gourmet restaurants, the House of Blues and the Disney Company.