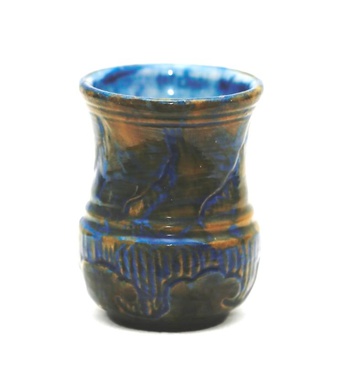 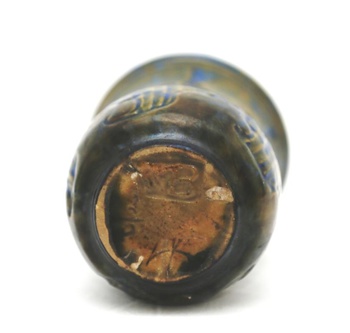 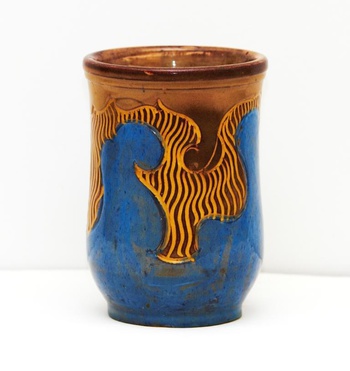 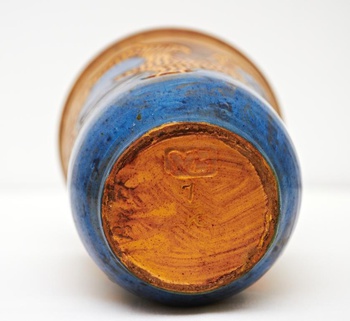 These vases come from a very short-lived pottery named Moeller & Boegely Kunstkeramikbraenderi ('Moeller & Boegely Art Pottery'), named after the founders, painter Eilif Moeller and architect Mads Peter Boegely. The pottery was founded in 1917 near Elsinore (about 40 km north of Copenhagen) and was destroyed by a fire in 1920.

Both vases have a decoration typical of Moeller & Boegely with wavy-line (almost geometrical) sgraffito areas alternating with organic cloud-like shapes in Skoenvirke style, the Danish take on Jugendstil / art nouveau. These particular vases are relatively simple; some of the Moeller & Boegely vases have more elaborate shapes and decorations with lids, handles etc.

Both of these vases were bought on antiques markets – the blue and brown one relatively cheaply as the seller didn’t know what it was. It is not unusual to see Moeller & Boegely items on markets and auctions, but they are often quite pricey (€ 70-150).

Until recently, the Moeller & Boegely Pottery has been relatively unknown, but lately the Pottery has been the subject of some articles and exhibitions and it has become quite well-known among us pot-aholics here in Denmark!

Height: blue/brown: 17.5 cm / 6.8 in; blue/greenish: 11 cm / 4.3 in. Monogram in both cases 'MB'. Under that (on the blue/brown one) the number 1 above a line and a K (on the other one, some illegible letters/numbers). Moreover, a few letters of which 'B' and I' are discernible. So far, nobody has been able to decipher the 'codes' used by M&B, and due to the fire in 1920 there aren't many sources which could shed some light on the marks.