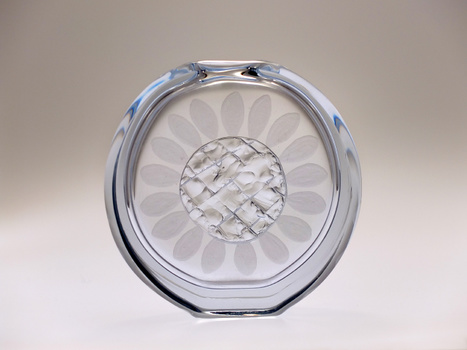 Round and molded blown, driven mouth ,flat polished and engraved/cutted. I think this vase by Rune Strand has all the elements that might be included in the manual glass craftsmanship. After blown in a mold, the mouth has been driven manually by a "drivsax". Then (in cold condition) polished on all sides, even the round ones (exept the driven mouth top). The bottom has been flattened, and finally one of the flat sides has been decorated with both engraving and cutting technique. Both the engraving method (with dental drill) and the cutting with iron chisel, are inventions by Rune Strand. The dental drill engraving came under his time in Kosta (late 1950s) and the cutting with iron chisel he took out in Strömbergshyttan. And both this vase design and the decoration pattern belongs to him. The vase was made in at least two sizes, 130 and 160 mm. This one is 130 mm. Model number: B1042. Decoration number C1062.

Rune Strand also invented two additional methods for decorating glass. A blasting method (at Hovmantorps glassworks in the 1970s) and a method to preform the gravure pattern, before operating the final manual engraving (also under his time for Strömbergshyttan 1963-68). Both of these are still used by Mats Jonasson at Målerås glassworks.