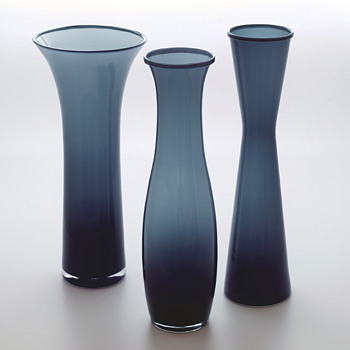 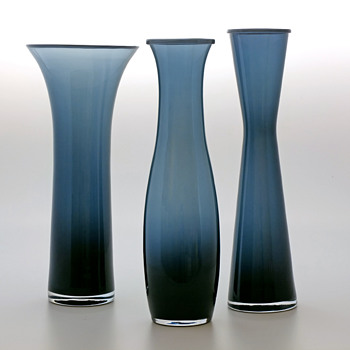 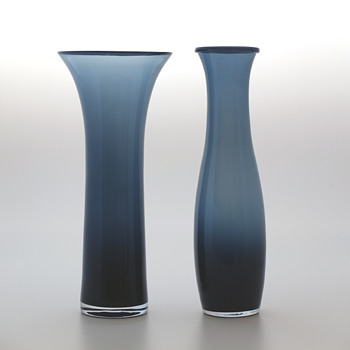 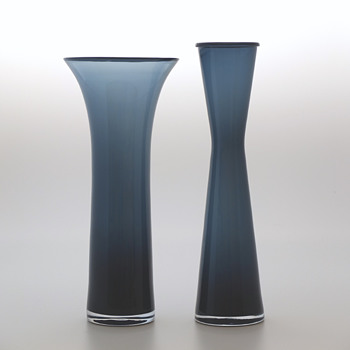 I have got these four vases (two ex of the right one) from recently inaugurated Orrefors/Kosta Boda Art Galley (http://www.kostaboda-artgallery.com/). They had found them when all glass from Orrefors were removed after shutdown last year. And now they were exhibited at the gallery (not the factory shop) in Kosta, among other art pieces that were for sale. The three models were available only in these 4 items, because they were samples that never came into production. In other words, probably unique (or extremely few manufactured) vases of Ingegerd Raman from her time at Orrefors 2000-2010.

They are handmade in a blue-gray underlay, quite thin and 320/335 mm high. The edge is folded, the vase on the left is folded inwards. I do not know how they did these foldings, because there are no pontil marks on the bottom. For folding the edge, usually need to pontil on a spike and then "drive" it with inwarmings, but here they have used a method I do not know. Probably they held the vase with a new type of tool that does not make marks on the sides, when the edges were folded on? They are in any case very well made and it's really good Orrefors quality of workmanship. I fell for Raman's simple and clean Retro-style where they stood among all art glass in modern style by Jungnelius, Hydman, Vallien, Brozén, Engman and others. They stuck out in it's simple lines one might say.