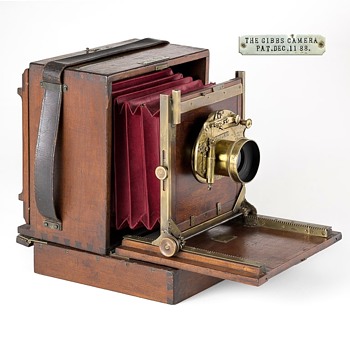 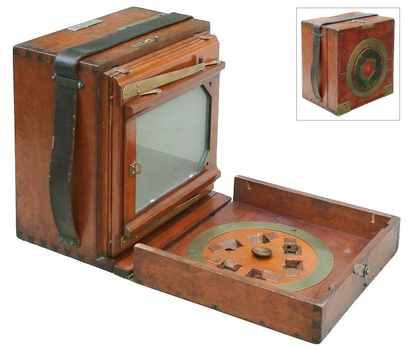 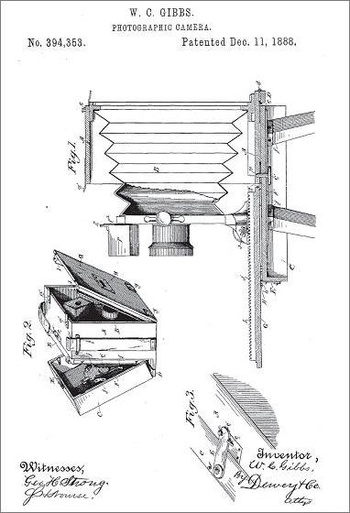 This is one of the more interesting cameras in my collection, and a really cool design. Today, collectors can look back on a rich variety of 1890s folding cameras, but few are as unique and distinctive as this early and rare Gibbs Camera (two others are known). What’s also interesting is that William C. Gibbs was located in Oakland, California; a long way from the epicenter of Rochester, NY based camera companies.

Gibbs’ 5 x 7 inch format camera is a large heavily constructed apparatus with bright red leather bellows, brass hardware, hand-cut dovetail joints, and described as the first self-contained camera. Several key features stand out, the most distinctive of which is a rear body cover that rotates 270 degrees to become a solid platform to hold the drop-bed.

In building his camera, Gibbs sometimes used parts from other builders. A turntable mounted into the rear body cover serves as a tripod head in the same manner as English Compact style cameras. The turntable found on this example has remnants of an impressed maker’s mark attributing the manufacture to be French. The rear ground glass assembly is - interestingly - from one of Thomas Blair's field view cameras.

Gibbs was also a photographer who used his own “Gibbs” camera to shoot pictures of the January 1, 1889 solar eclipse. In a letter published in a report by the Regents of the University of California, William Gibbs wrote about his observations of the event and mentioned having successfully exposed two plates that would be given to the Lick Observatory.