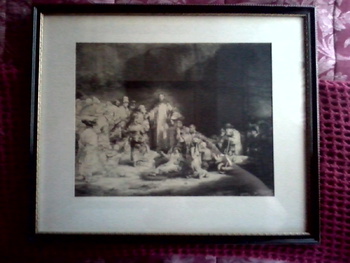 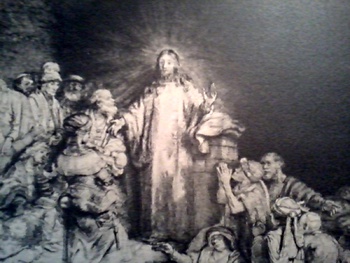 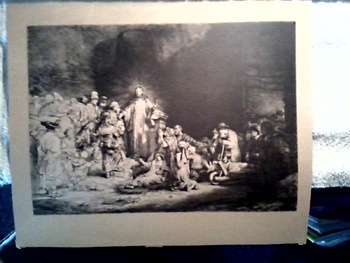 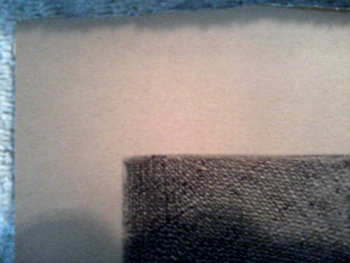 Found this at GW's and thought it was rather nice. It's a very clean and sharp print on heavy paper, which has darkened over the years. It's old but not that old. Not sure what to make of it other than I knew it was a Rembrandt print. I removed it from the frame and cleaned the glass. The print itself was taped very haphazardly to the mat with a few pieces of masking tape. It looks like it was possibly cut from a sheet because the top and one side are trimmed crooked while the other two sides are relatively square. The matted image is roughly 10 1/2" x 13 1/2". No marks or signatures of printing companies are in the margins. No identifiers what so ever. I used a magnifying glass and didn't see any dots just clean sharp lines especially where it's lightest to the left side. There is actually a copy in Oberlin's Allen Art Museum a few miles from my house. While the actual number of prints is unknown the Allen has one of the seven that are know to exist. It's printed on a special Japanese paper that doesn't absorb the ink which produces a very detailed version from the plate. I'll have to run up there one day and take a look for comparison. Maybe I have number eight right here....lol. -Mike-

The Hundred Guilder Print is an etching by Dutch artist Rembrandt Harmensz Van Rijn (1606-1669). The etching's popular name derives from the large sum of money supposedly once paid for a single impression or copy. It is also called Christ healing the sick, Christ with the Sick around Him, Receiving Little Children, or Christ preaching, since the print depicts multiple events from Matthew 19, including Christ healing the sick, debating with scholars and calling on children to come to him.The rich young man mentioned in the chapter is leaving through the gateway on the right.
Rembrandt worked on the Hundred Guilder Print in stages throughout the 1640s, and it was the "critical work in the middle of his career", from which his final etching style began to emerge. He probably completed it in 1649. Although the print only survives in two states, the first very rare, evidence of much reworking can be seen underneath the final print and many drawings survive for elements of it.
The etching is described as a "technical tour de force, incorporating an enormous diversity of printmaking styles and techniques.
The group of figures at the left side of the print, for example, is deftly indicated with a minimum of lightly bitten lines; in contrast, the evocative richness of the blacks and the depth of tone in the right half of the print represents Rembrandt's experimental competition with the newly discovered mezzotint technique.