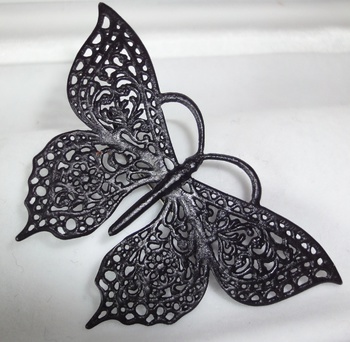 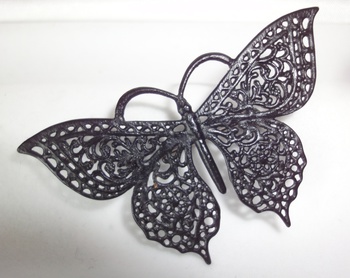 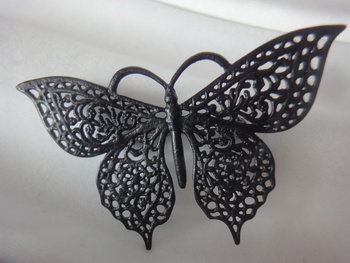 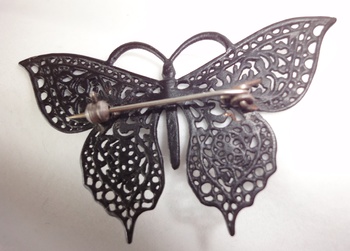 I have this piece of jewelry returned to the seller although I think it is beautiful. I still do not get it off this page because:
The seller sold it as an ornament of Berlin Iron from the early 18th century but I discovered it is a modern example of an old original of an old example. This is a so-called re-casting But the mold is completely copied to a mold of the early 18th century. This is very hard to see but the "modern" pin on the back of this brooch is impossible to attach to an old cast iron ornament. Hence, I have discovered this.
So if you are want to purchase a Berlin Iron (Silesian meshwork) jewelry be very carefully and be well informed! ! !

This was my original description as they sell it to me when I placed it on CW:
This Brooch was designed by Simon Pierre Devaranne in the year 1821. One already poured this jewelry in this time, in order to exchange it against golden jewelry and to fill with it the war cashes of Prussia in the liberty wars against Napoleon. One decorated oneself with a jewel from iron faithfully the slogan: “I gave gold for iron”, in order to lend to its patriotic conviction expression. As much to the historical background.
Technically this 3.5 gram represents heavy and cast piece a undreamt-of challenge provided with 250 break-throughs. It applies to bring not only an extremely brittle material into a manufacture-technically difficult form in such a way to control but also its cooling from 1350° “ that a "jam everyday process of" piece of jewelry develops. The project uses a centuries-old hand-molding process, which operates with continuous model. As much to the technical side.
The aesthetic effect of this trinket speaks for itself and must be not further commentated. The measures are: width 60mm, length 35mm original was carried the Brooch also as such. In addition the pin with safety device serves. One can carry it in addition, as neck decoration, by pulling a necklace by the break-throughs of the wing ends.
If you want to know more about this kind of jewelry please look at the following links:

and the article by article by Ben Marks Senior Editor of CollectorsWeekly:
http://www.collectorsweekly.com/articles/when-germans-gave-up-their-gold-jewelry-to-battle-napoleon/