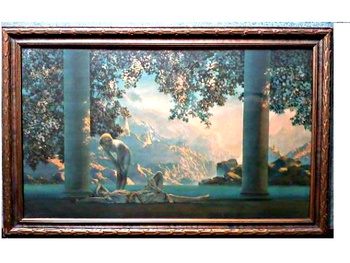 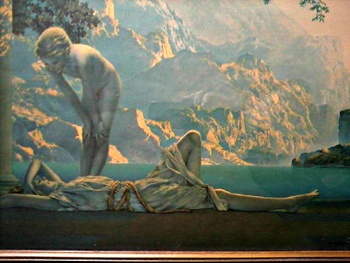 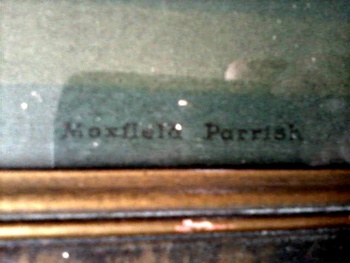 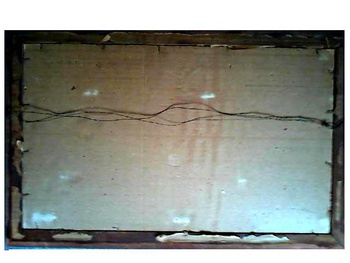 I was just about to walk out of the Avon GW and I spied a stack of pictures up against the wall. I actually look at frames first especially if they look old they will catch my eye. I flipped ahead to this frame and saw the beautiful Maxfield Parrish print called "Daybreak". It's quite large. Almost the size of the original painting which is about 26" x 45". So this one is not quite as long as the original. (The original sold at Christie's in 2010 for $5,234,000.00 with buyers premium.) The back paper has long since disintegrated so it no longer had it's tag. Most of these came from the "House of Art" in New York. These were made in many sizes and "Daybreak" was about as popular and well known as DaVinci's "Last Supper" in it's day. This one is in great condition and carries a hard to read signature along the bottom of the frame. The frame has a few nicks and scrapes on the top, but not too bad. I don't think the ladies at GW noticed the signature hidden at the bottom in the grass. Not that it was cheap at thirty bucks. They price by the frame style and size and not so much what's in it most of the time. I'll replace the backing paper and it will be ready to hang. -Mike-

Maxfield Parrish (July 25, 1870 – March 30, 1966) was an American painter and illustrator active in the first half of the 20th century. He is known for his distinctive saturated hues and idealized neo-classical imagery.
Born in Philadelphia, Pennsylvania, he was the son of painter and etcher Stephen Parrish. He began drawing for his own amusement as a child. His given name was Frederick Parrish but he later adopted the maiden name of his paternal grandmother, Maxfield, as his middle name, and later as his professional name. His father was an engraver and landscape artist, and young Parrish's parents encouraged his talent. He attended Haverford College, the Pennsylvania Academy of the Fine Arts, and Drexel Institute of Art, Science & Industry. He entered into an artistic career that lasted for more than half a century, and which helped shape the Golden Age of illustration and the future of American visual arts.

"Daybreak" is regarded as the most popular art print of the 20th century, based on number of prints made: one for every four American homes. According to the The National Museum of American Illustration, it has outsold Andy Warhol's Campbell's Soup Cans and Da Vinci's Last Supper. It is still in print.
Parrish referred to Daybreak as his "great painting", the epitome of his work. Measuring 26.5 by 45 inches (67.3 cm × 114 cm), the painting employs a formal layout similar to a stage set, with two feminine figures. Painted using preparatory photographs, the models were his regular models, Kitty Owen (granddaughter of William Jennings Bryan), Parrish's daughter Jean, and Susan Lewin. Only two figures appear in the completed painting, though pencil studies indicate that the artist originally intended a third near the right hand column. The composition is arranged on the principle of "dynamic symmetry" popularized by Jay Hambidge.
Parrish's art features dazzlingly luminous colors; the color "Parrish" blue was named in acknowledgement. He achieved the results by means of a technique called glazing where bright layers of oil color separated by varnish are applied alternately over a base rendering .Parrish usually used a blue and white monochromatic under painting.
He would build up the depth in his paintings by photographing, enlarging, projecting and tracing half- or full-size objects or figures. Parrish then cut out and placed the images on his canvas, covering them with thick, but clear, layers of glaze. The result is realism of elegiac vivacity. His work achieves a unique three-dimensional appearance, which does not translate well to coffee table books. 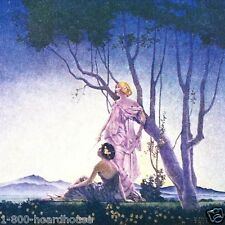 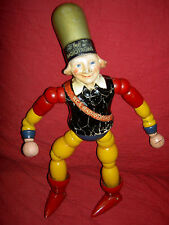 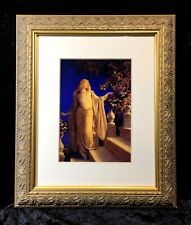