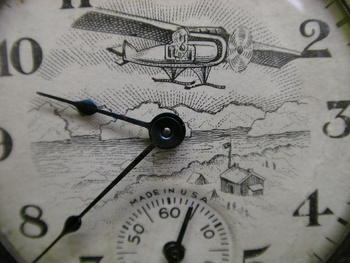 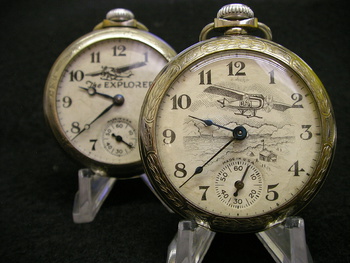 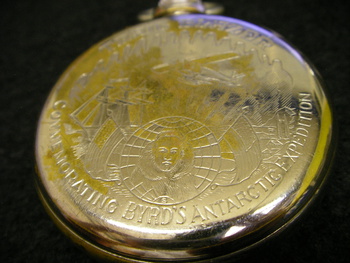 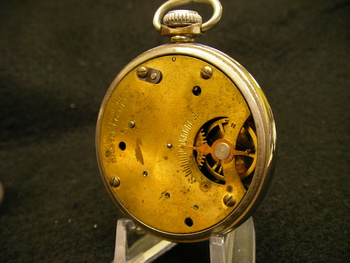 I have recently posted 'The Explorer' pocket watch which was made by E Ingraham Co. circa 1929 to commemorate the South Pole expedition event. There is however another watch, also made around the same time by Ingraham for the 'Trail Blazer Watch Series', to commemorate the person in charge of this expedition, namely Admiral Bryd.

In 1928, Richard Evelyn Byrd began his first expedition to the Antarctic involving two ships, and three airplanes. A base camp named 'Little America' was constructed on the Ross Ice Shelf and scientific expeditions by snowshoe, dog-sled, snowmobile, and airplane began. On 28 November 1929, the famous flight to the South Pole and back was launched. Byrd, along with pilot Bernt Balchen, co-pilot/radioman Harold June, and photographer Ashley McKinley, flew the Ford Trimotor to the South Pole and back in 18 hours, 41 minutes. It entered Byrd into the history books and promoted him to the rank of Rear Admiral by a special act of Congress on December 21, 1929.

This pocket watch has a dial depicting the above mentioned flight over the base camp. The case back is decorated with Byrd's portrait, 2 American flags, expedition sceneries and the words 'Trail Blazer - Commemorating Byrd's Antarctic Expedition'. The art decor style bezel has engraving of the tools and equipment used for the expedition.

Here is the link for 'The Explorer' pocket watch mentioned above : http://www.collectorsweekly.com/stories/126923-1929-the-explorer-pocket-watch-by-e-ingr

And here is the link for another watch in the 'Trail Blazer Series', namely the 1928 'Zeppelin' pocket watch by Westclox :
http://www.collectorsweekly.com/stories/107913-1929-zep-pocket-watch-and-watch-fob