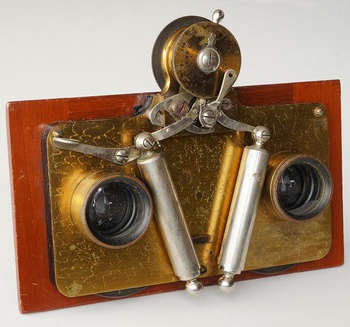 Oh how I love early brass shutters. Their distinctive designs give cameras great personality. In thinking about Phil’s wonderful car mascots, I now view these beauties as ‘camera mascots.’ (More postings to come.)

Some shutters were practically works of art and this fine early model B&L stereo shutter (s/n 300) is representative of how the Prosch Stereo Triplex (I posted earlier) concept evolved.

Whereas the earlier Prosch Stereo Triplex was thin bodied with simple external components, Bausch and Lomb added precision to the mechanics to create a greater range of shutter speeds. The mechanics were then moved inside a decorated brass body for protection against dirt and grime.

And unlike the Prosch having only three discrete speeds, the B&L stereo shutter has an astounding range from 1/100 of a second to 3 seconds! After cocking the shutter, a photographer would then turn the large dial to choose a shutter speed. For those of you into this sort of thing, the speed range is managed by an oversized ‘air break’ pneumatic cylinder (on the right).

The B&L stereo shutter was offered as standard equipment on the 1898 and 99 Henry Clay Stereoscopic cameras and on other manufacturer’s stereo plate cameras.

As a note, this shutter does work but the slowest speeds are somewhat flakey.