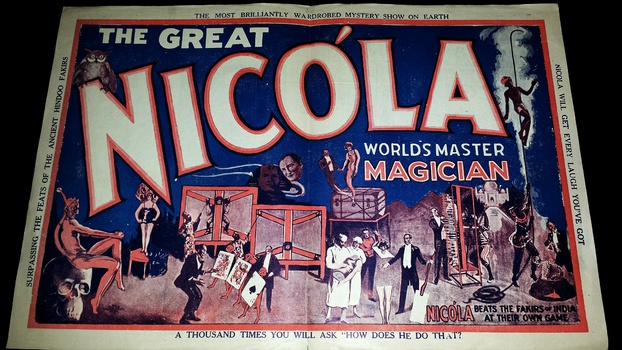 This is an original Nicola mini lithograph poster from my private collection of Magic posters ca. 1930. This poster folds down to a 4 page flyer that advertised The Great Nicola's world tour in Australia at the King's Theater, Melbourne.

Nicola (1882-1945) performed on vaudeville for a number of years and did several world tours with his illusion show as the Great Nicola and as Nicoli. He was a successful big stage illusionist in the mode of Thurston, Blackstone, and Dante. But early in his career he dabbled in escape, even co-opting Houdini's billing as "King of Handcuffs."

During his last world tour in 1939, on outbreak of World War II, the ship he was on hit a mine and sunk with all his equipment off Singapore. After his return home he built a new smaller show, suitable for auditoriums and hospitals, and offered his services free of charge to the USO.

Magic Book -The Art of Astonishment...
$50
See all