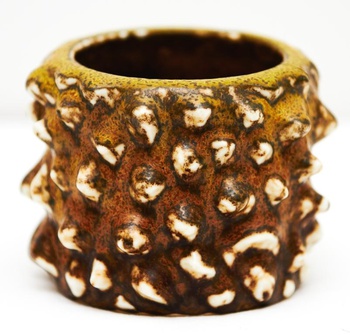 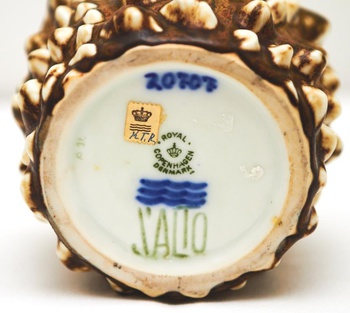 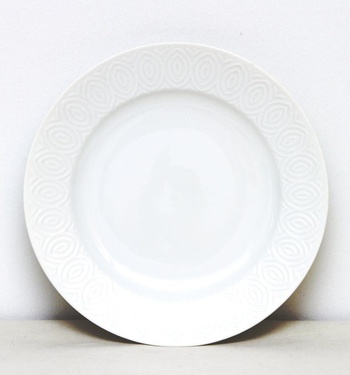 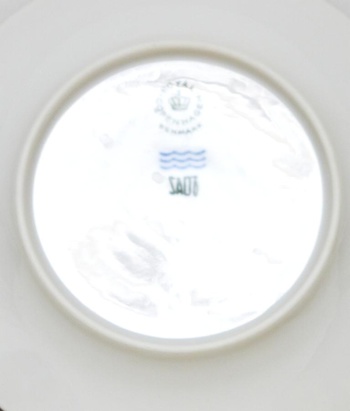 Although I am not a huge fan of Axel Salto’s pottery (heresy!) I suppose there is no way around him if you are interested in Danish ceramics, so here we go! Axel Salto worked for Bing & Grøndahl 1923-1925, then briefly for Saxbo (1931-1932) and finally from the mid-1930's for Royal Copenhagen. He was also a painter, writer, and graphic artist.

This particular vase is decorated with the so-called solfatara glaze (named after a volcano in Italy) which was developed at Royal Copenhagen by H.A.L. Madslund and Nils Thorsson, in use from 1936 and favored by Salto (apparently much to the chagrin of Thorsson). It is a very difficult glaze to use and works best on irregular shapes (reliefs) where it will leave the ‘peaks’ with a bone-like surface and retreat into the valleys, pooling there like greenish yellow lakes. At some point, one of the ingredients for this glaze was under suspicion of being radioactive and was forbidden to use after 1958. Salto was one of the few people using the glaze and no attempts to find a substitute were made so it was hardly ever used after his death in 1961. In his own writings Salto termed his different stoneware styles 'fluting', 'budding' and 'sprouting' and this vase is an example of the 'budding' style.

I am not sure where the vase is from and the condition isn’t good - I think it belonged to my grandparents. In my opinion, this is the kind of pottery you have to 'get to know' before you start appreciating it - apparently many people do today as Salto's works fetch exorbitant prices at auctions!

Unlike many of his peers in Denmark and Sweden Salto did not in general design dinnerware and other objects for daily use. Actually, he only ever designed one range of dinnerware which simply goes under the name 'Salto dinnerware'. There are numerous items in the range such as plates, dishes, cups, tureens etc. It was designed in 1956 and is really elegant in my opinion! I am not sure for long it was produced. You will see it from time to time, but from what I've heard it is not hugely popular as people now prefer something with a little more colour, so you can actually buy it for reasonable prices. The pattern on the dinnerware (here around the edge of the plate; enlarge the picture to see the details) is very similar to what you can see on some of Salto's ceramic bowls and vases as well. I recently saw a very beautiful (and very expensive!) bronze bowl with this kind of pattern.

Size of the vase: Height: 8.5 cm; diameter: app. 10 cm. Plate: diameter 15.5 cm. Mark on the vase: Series number 20707. Royal Copenhagen mark and three wavy lines (originally developed on the basis of a suggestion by Queen Juliane Marie on the very first Royal Copenhagen board meeting May 1, 1775 and thought to represent three Danish waterways!) - this combination was in use from 1923 and onwards. The little line under the 'K' in Denmark indicates the year of production (1961), although the vase is probably designed earlier than that (1940-1950). Finally the signature SALTO.