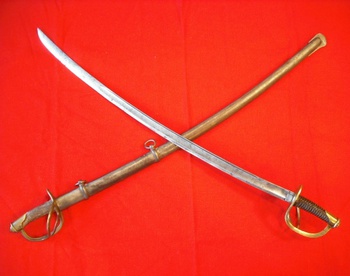 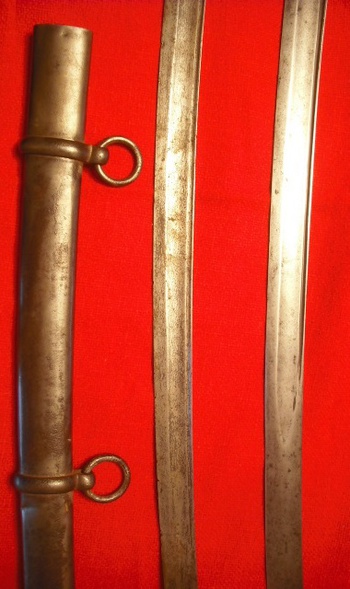 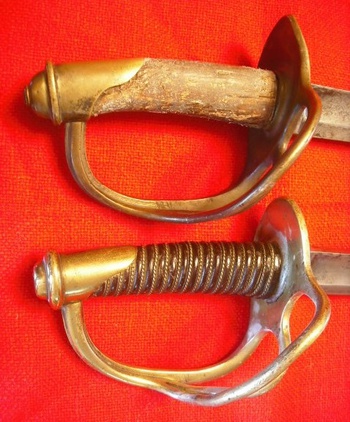 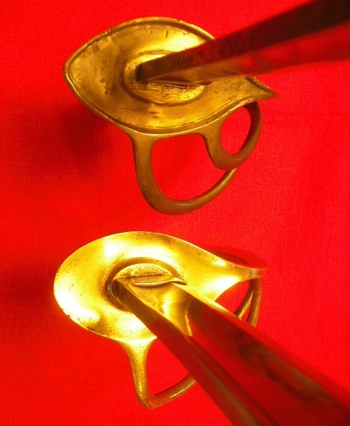 The U.S. 1840 Cavalry Saber, nicknamed the “old wrist breaker”, was copied from a French Hussar’s Sword. It was superseded by the model 1860 saber, but was still prominent at the start of the American Civil War. Thousands of these swords were imported during the war, as these may have been. Unfortunately, since these swords were shipped all over the world, I’m only saying these are 1840 “style” cavalry sabers. Both sword blades have two fullers, the usual wide fuller in the middle, but also a thin one at the top. Both are 1 ¼ inch wide and between 35 ½ and 35 5/8” long.

The one with the leather bound grip is totally unmarked, as were many import swords during the Civil War. The brass has gotten a coat of lacquer and the areas that appear milky in the photo are where the lacquer has worn away. A few swords in my collection have been dressed up with lacquer. I presume it was for an honor guard, veteran’s parades, or maybe just to look nice over a mantel. The leather bound grip has more wear than the photo implies, and seems original. I still have the price tag from the seller, who wrote “…No markings/Confederate import?/From Virginia.” Uh huh.

The one with the bare wood grip bears the maker’s mark of C&J (Clemen & Jung) at the base of the blade. C&J of Solingen was a company that sold swords to Union dealers during the war. There are no other markings. The guard is a bit different, with a pronounced ridge around the edge, pointier shape and a prominent pommel capstan. When I bought it someone had amateurishly glued some leather to wood to make it look better. It didn’t. I removed it but the glue still shows. Originally, a piece of string would have been wrapped around the wood with a space between each wrap. The leather would have gone over the wood and string, then a brass wire would have been wrapped over the leather between the underlying wraps of string to give the grip its hills and valleys. This sword came with a two ring iron scabbard missing the throat.