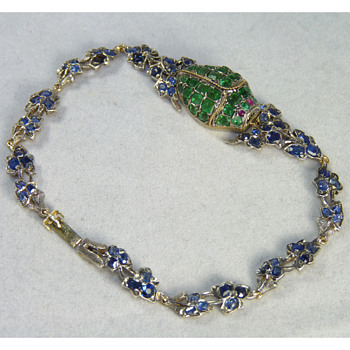 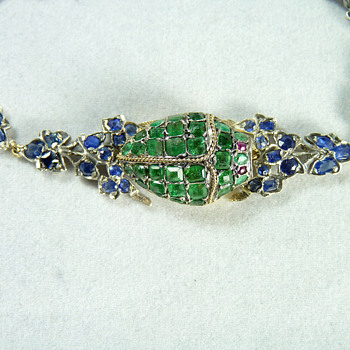 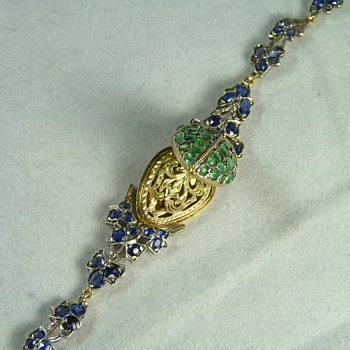 Jewelry with special meanings is a favorite of mine. From Georgian love tokens with acrostic gem settings, to Art Deco charms with quirky subjects, these pieces helps us connect with the thoughts and feelings of the makers and past owners, even when all other traces of their identity are lost.

There are no maker's marks on this emerald, sapphire and ruby encrusted scarab bracelet, made of silver topped 18ct gold. What we do know, is the maker was steeped in a centuries old tradition of making seductive love tokens poignant with meaning.

At first examination it depicts a lush little scarab beetle on a bracelet of flowers. Closer inspection reveals a surprise, the scarab opens to reveal a vinaigrette, complete with removable grill, engraved in the Georgian style.

There is a clue to dating the bracelet, the sapphires are synthetic. Verneuil was mass producing synthetic rubies by 1903, but blue sapphires were not perfected until 1910. I doubt the scarab dates from the Egyptian Revival that followed discovery of Tutankhamun's tomb in 1922, when the design would've been more geometric, in the Art Deco style.

I think this piece dates to the early C20th fashion for the exotic, that included ancient Egypt. Cartier began to design and make Egyptian style jewels as early as 1910, and Parisian interest in Egypt was revived and intensified by the Franco-Egyptian exhibition at the Louvre in 1911.

In my opinion the piece is late Edwardian, transitional Art Nouveau, and dates to circa 1911, a few years before WW1. I think it is probably French, made by a Paris "joallier" with early access to Verneuil sapphires.

My imagined joallier was working in the Georgian tradition of producing seductive love tokens, inspired by the birds and bees, and the jewelers' language of love. It's not only the birds and bees that fertilize flowers, in fact beetles pollinate 88% of all flowering plants.

This bright green scarab beetle is NOT the dark dung beetle revered by the Egyptians. The green scarabs (which include flower chafers) have this color for camouflage on the plants whose flowers they fertilize while munching upon their leaves.

The green scarabs have a distinctive smell, and it is a curiosity that some of the plants they inhabit have developed a similar scent, to attract the beetles to the plant to encourage pollination.

So this bracelet invokes an amulet of gorgeous flowers, set to attract the handsome scented beetle, who will fall upon it and consume it while fertilizing it. Potent symbolism, and oh what fun to explain the secret message to that special someone at just the right romantic moment.

One possible maker is Verger Freres (see: http://www.chubbcollectors.com/Vacnews/index.jsp?form=2&ArticleId=273) based on a similar ring signed F.V. which you can see here: http://www.kentshire.com/product/jewelry/fine-jewelry/new-and-notable/Z28254

However that is a guess at best, and this one is a mystery!

Vinaigrettes and Pomanders
See all