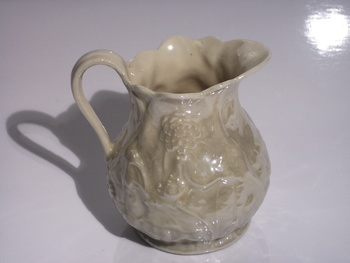 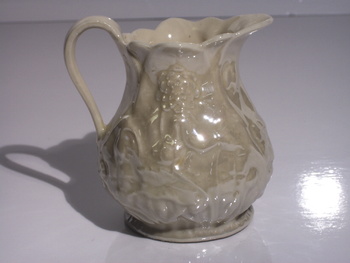 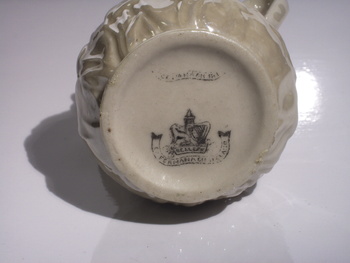 Hi
Everyone.
This is post 2/2, on the first ward sale visited on the 07-11, saturday on my birthday present hunt, this very delicate creamer, made again by "Bellek pottery", this one carry a black factory mark, i read, it was before 1946.
Very light piece of porcelaine pottery, very amaze there no damage on either pieces.
This little creamer stand 3 inch tall, by 3.75 inch at the widest portion, on a 2 inch base.
Decorated with flowers and Vine

Belleek was born on the banks of the river Erne (pronounced Aaron) in the County of Fermanagh (pronounced Fir-man-ah) in Ireland, the brainchild of John Caldwell Bloomfield. Bloomfield inherited the Castle Caldwell estate which encompassed the village of Belleek. Due to the severe deterioration of the estate, he vowed he would start a pottery to provide employment and upgrade conditions. It was a natural choice; all major ingredients to make pottery were present on the estate: feldspar, kaolin, flint, clay, shale, peat, power and trainable labor.

Bloomfield turned to two men for help in starting the enterprise. David McBirney provided the money and Robert Armstrong, an architect later called 'the father of Belleek', the artistry. Bloomfield leased the land and buildings to this unlikely partnership for 99 years.

During the early years the partners kept apprentice potters in virtual bondage, fearing that their production secrets would leak out. Very few of the English workers remained after completing their apprenticeships; many emigrated to the United States to help companies such as Ceramic Arts Company (later Lenox) Ott and Brewer and Willets produce American Belleek.

One Englishman who remained, much to the benefit of Irish Belleek, was William Henshall, who is credited with the introduction of basketwork and applied flowers. Thus, the Henshall basket, one of the lovliest of the delicate Belleek baskets, is named in his honor. Henshall remained at Belleek until his death and his heirs sill reside there.

Few collectors realize that earthenware was the first product of Belleek. It remained their principal product until 1920, and was only discontinued entirely in 1946. Examples of early earthenware are rare and consequently quite costly if they can be found at all.

The company wanted from the outset to produce porcelain and compete in the world market, but all early attempts failed. In about 1863, after 6 years of experimentation, potters produced a small amount of parian china and by 1869 the perfected Belleek parian ware was being ordered by Queen Victoria, the Prince of Wales, the Duke of Abercorn and others of the nobility. International success came when Queen Victoria presented a Belleek tea service to the German royal family.

Despite international honors recognition, in 1882 the Belleek factory was in jeopardy. McBirney, the financier, died and his son demanded that the Belleek factory and its lease be sold. Armstrong, the artist, had never demanded a written partnership agreement and therefore had little control. He battled to keep the company from being sold, but with his death in 1884, the factory was put up for auction.

The factory was sold and managers came and went, although the porcelain itself continued to gather honors. The International Centre Piece molded by Frederick Slater was awarded the Gold Medal at the Paris Exhibition of 1900, one of four such won over the years. With the troubles surrounding WWI, the factory was again up for sale. Purchased by Bernard O'Rourke in 1920 it was kept in Irish hands.

After WWII, the Belleek pottery concentrated all its production on parian china. The timing was right; Belleek found an insatiable market, both domestic and foreign. It was purchased again in 1985 by another Irishman and continues today to be a genuine Irish product.

Many of the patterns produced are named for natural elements- the sea surrounding the land and lands such as Finner and Rathmore. Some favorite employees are also memorialized by pattern names, such as Henshall, and Cleary, after James Cleary.

Belleek's marking system makes it fairly easy to date pieces, even though some patterns have been produced over a long period of time. The first three marks are black, lasting until 1946. The next three marks are green, lasting until approximately 1980, and the following mark was gold. Pieces with an early stamp bring prices almost double that of a similar piece of a later period.

Most collectors are aware of this system of marks; however they may not be aware that not all Belleek is marked- some either wore off or slipped through the marking system. There are also some unusual markings:

One note about Belleek baskets: if you remember that three strand is older than four strand, you can always be in a range of years.

There are currently no books in print on Belleek.

Belleek still reigns as a favorite on the international market, due mainly to the wonderful designs developed to complement the land and sea around it.

Kathy Bailey is an appraiser sometimes featured on the Antiques Roadshow. -Paul and Kathy Bailey