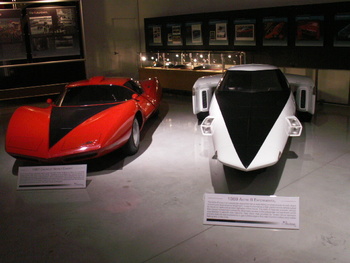 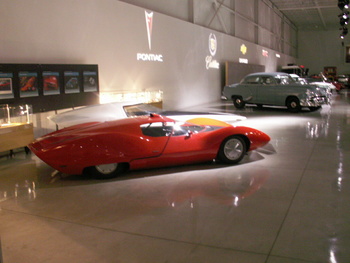 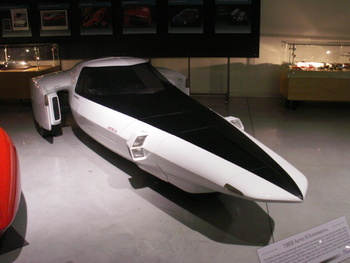 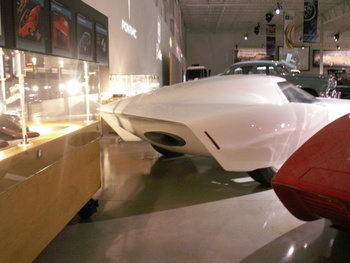 I was looking through some photos and ran across some I had taken in 2009 while attending a symposium in Troy, Michigan. While in Troy, I was able to visit the General Motors Heritage Center in near by Sterling Heights. The GM heritage Center is not open to the public, so I was extremely excited to be invited.
My photos are not the greatest and some did not turn out at all, but I will start with these:
First, the red car, is a 1967 Chevrolet Astro I Concept.
Their description sign read:
It the shape of the Chevrolet Astro I looks futuristic today, imagine its debut as a concept vehicle at the 1967 New York Auto Show. Designed to investigate the "visual potential of automobile aerodynamic characteristics", Astro I dramatically demonstrated the harmony that could be achieved between aesthetics and aerodynamics. These design parameters led GM Design to the Corvair platform with its air-cooled, rear-mounted engine and the absence of a space-cosuming radiator. The Astro I body is fiberglass.
Second, the white car, is a 1969 Astro III Experimental.
Their description sign read:
The Astro III was a two-passenger experimental car resembling an executive jet aircraft, down to its tricycle-type wheel arrangement. It was envisioned as a high-performance vehicle suited for travel on restricted access highways in the future. The Astro III featured a power canopy that moved forward and upward to allow easy access to the passenger compartment which was finished in aircraft style interiors. Rear vision was provided by closed circuit television and the Astro III was powered by a gas-turbine engine that was found in military and civilian helicopters of the time.
If you happen to visit this area, figure out a way to attend a tour.