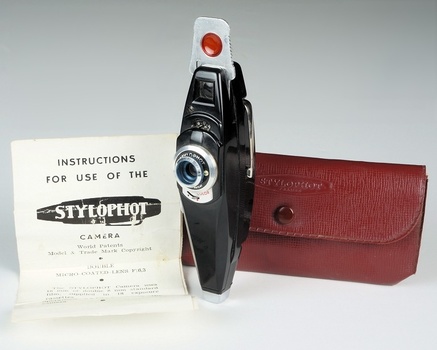 Long before specializing in early wood cameras, I collected unusual and quirky apparatus.

In 1955, Secam (Paris, France) made a series of ‘pen’ style cameras by the name of Stylophot. These weren’t meant to be spy cameras, but something small looking more-or-less like a hefty pen that fits in a pocket. In reality, the side mounted pocket clip is the only thing giving the Stylophot a pen-like appearance.

This particular example is the “Color” model which includes its original maroon plastic case and instructions. It makes 18 exposures in a 10 x 10 mm format on 16 mm film. Shutter cocking and film advance is done by using the metallic pull-push thingy at the top of the camera.

Some collectors call this scarce camera cute, but I think of it as odd and interesting for a mid 20th century design.