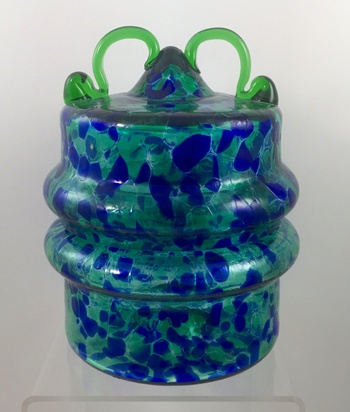 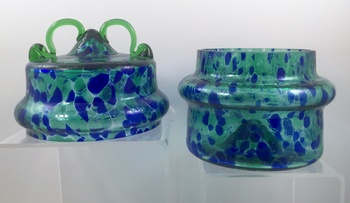 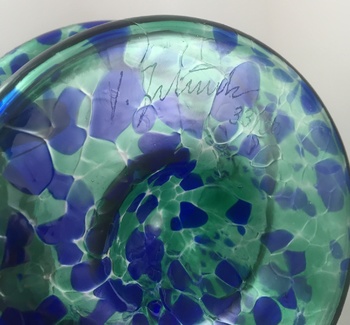 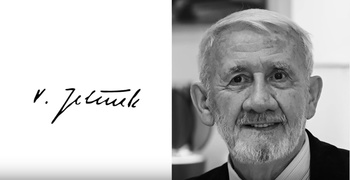 Vladimir Jelinek was born in 1934 in Zizice (Slany), in (then) Czechoslovakia. He studied at the glass school at Kamenicky Senov at an early age (1949-1952), then at the Academy of Applied Art in Prague from 1952-1958. He designed for the Karolinka glassworks from 1961-1964, then at the Institute of Interior and Fashion Design until 1977. After a few years teaching, he returned to the Institute until 1998. As an independent artist, he produced glass in Skrlovice, Novy Bor, and Karlovy Vary (Moser). His works are in private collections and museums around the world, and he has won many awards.

This piece is not in a style that Mr. Jelinek is generally known for. He is best known for offhand organically shaped pieces in a contemporary style. This jar hearkens back to an older style, which I found interesting. It is signed and numbered 33/50, indicating a limited edition. Once I acquired it, I made it a mission to find out more about it - when was it made, and for what purpose. Fortunately for me, Professor Jelinek is active and going strong at the age of 81. With the help of the Moser factory, I was able to contact him directly via e-mail. I received a courteous reply just a few days later:

Thank you for your letter and here are some informations about my piece.

Around year 1990 I cooperated on design of new products with the glass factory Crystalex in Novy Bor. At the time between years 1990-1995 I created together with masters glass blowers limited collection of objects using some old glass techniques. On request of collectors I personally signed few pieces. The jar on your photo is one of these pieces.

Thank you for your interest in my work and I hope you will be satisfied with my informations.

So the older styling of the piece (the very thing that attracted me to it) was intentional, it is a limited edition hand signed by the artist (somewhat rare in postwar Czechoslovakia due to nationalization of the industry), and best of all I got the added bonus of being able to correspond in a small way with the gifted designer who made it!

Sources: Hi Sklo Lo Sklo, by Mark Hill
allartsgallery.com
(some special characters removed above because they can not be displayed in this forum)