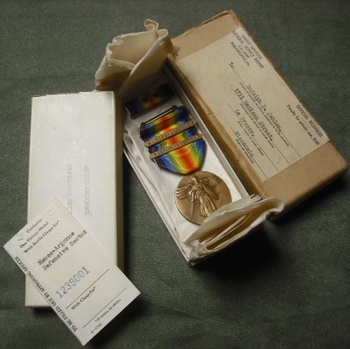 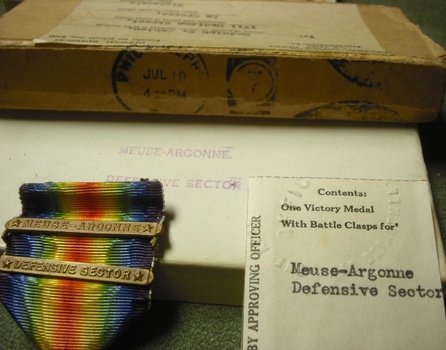 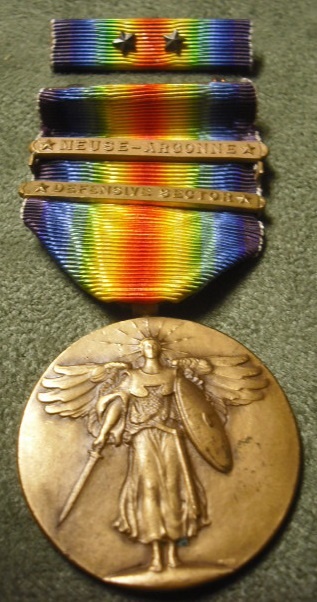 Here’s a great example of a victory medal with all the materials as shipped to the recipient 95 years ago.

The box contains wrapping material, a two-clasp medal, two star ribbon bar, and the approving officer’s contents slip. The slip shows this veteran was authorized to wear the Meuse-Argonne battle and Defensive Sector clasps on his medal. The slip is numbered and stamped with a raised seal. The medal and ribbon bar appear never to have been worn, and appears to have just been stored away in the box after it was received.

The interior box has separate top and bottom, both covered in white paper. Although the manufacturer’s name is absent, of the three authorized victory medal contractors, only the Joseph Mayer Company of Seattle made white two piece boxes. The lid is stamped with the names of the two authorized clasps, this would have been done at the Philadelphia Quartermaster Depot where the slip was filled out. The box fits perfectly into the shipping box, which is marked from the General Supply Depot, Philadelphia PA to the veteran, Rudolph Jehlen in La Crosse Wisconsin, postmarked July 10th (1920).

As often happens, most details of Rudolph Jehlen’s service are missing. In 1973 a huge fire at the National Personnel Records Center destroyed about 80% of WWI veteran service records. The clasp combination is of little help – Soldiers from eight divisions wore this combination. What I have been able to put together is this:

Rudolph Jehlen was born and raised in La Crosse Wisconsin, and completed the 8th grade. By the time America declared war, he was 27 years old, single, and working as a sheep herder in Wyoming. After the war he returned to La Crosse and worked as a butcher, eventually owning his own meat market. Along the way he married his wife Emma. In his later years he moved back out west to Idaho, where he passed away in 1957.