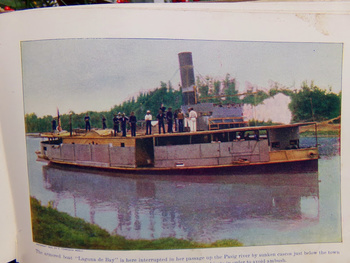 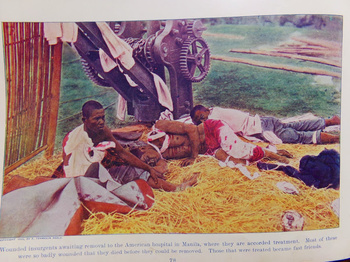 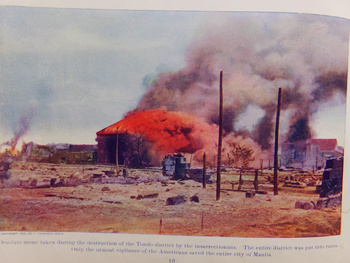 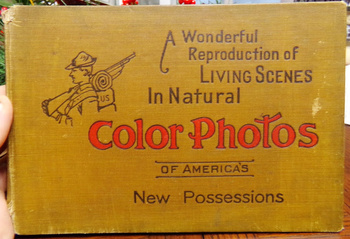 The Spanish-American War, based mostly in the Philippines, occurred in 1898.
These photos were taken, colourised after the war (they don't want you to think that, but the fact that some of the uniforms are the wrong colour kind of proves that,) and they show daily life, battles, and ruins as well as reconstruction in areas hit.
We also get to see (me, not you,) a Spanish surrender and a bridge one Filipino friend says is still standing. Apparently, those flying the Chinese flag were left alone as "non-combatants."

Picture 1, if I recall, is of a captured boat used as a warship by the Americans (it's firing back at attackers.)

Pic 2 tells us how of the "insurgents," "those that were treated became fast friends." (Most, apparently, died before treatment.)

Pic 3 is of the "insurgents," or Filipinos wanting to keep the Spanish, trying to raze I think it was Manila to the ground. They succeeded in burning a very beautiful Church used as a hospital.

This book was given to me to restore, and when I was almost done I was told to keep it. I never finished. LOL.

It is a beautiful compilation of many illustrations that can be gone through at "the parlor table in about an hour's time."