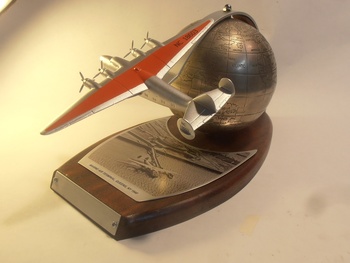 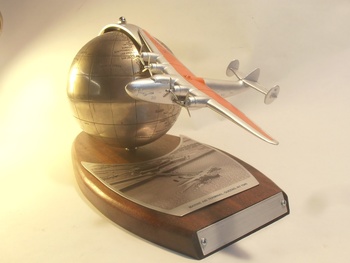 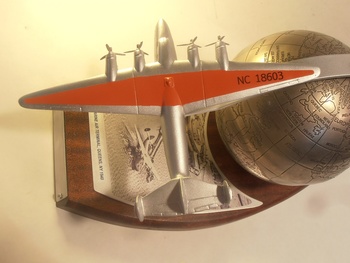 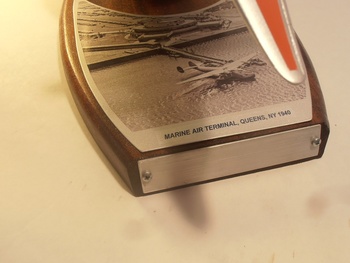 This is a 1938 Rehberger (Chicago) cast metal airplane model going through a custom restoration for an airline museum in Atlanta, GA. The Art Deco model is relatively small with a 9" wingspan and originally commissioned by Juan Trippe, President of Pan American Airlines. The original population was approximately 1,000 units and were mounted on clocks, ashtrays and other optional bases. Currently there are just a handful of these models still in existence.

The model reflects Pan Am's advertising is 1939 of being America's only worldwide airline. In this case, it is celebrating the unveiling of Pan Am's new Atlantic route from New York City to Southampton, England. This was to also used to promote travel by Europeans to the 1939-1940 New York Worlds' Fair. The airplane and globe are vintage 1939. The base is vintage mahogany and features a "tintype" photo of the opening day at the Marine Air Terminal at Laguardia Airport in Queens, New York. The model depicts the first Clipper to fly the new route, registered as NC 18603.

You can view this airplane on its inagural flight-
www.youtube.com/watch?v=pRYzFjift2Q