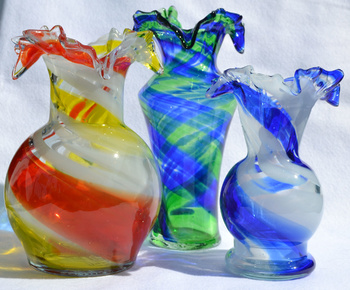 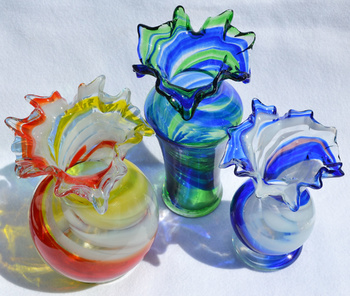 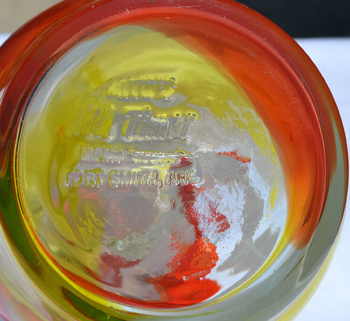 I am in no way an expert on this glass but I seem to be the person with access to the reference resource at the moment. It is not Czech, it is not Murano - though I often see it listed as one or the other on auction sites.

Some of you may have noticed in my posts that I am somewhat fixated on marks so my first examples of this type of glass are marked Smith's Old Timer. Smith's Old Timer Glass Co. of Fort Smith, Arkansas was the only one of the two dozen or so related glass companies making what Curtis Martin calls OZARK ART GLASS (in his as far as I know only reference work covering this glass) that permanently marked their ware and they only marked a small percentage of their production. Becraft Glass, also of Fort Smith, made identical items to the two end pieces in the picture. An identical to the taller vase was made by the Central Glass Co. of Pocola, Oklahoma. Without the mark they are impossible, or nearly impossible, to tell apart.

To add a time line to this type of glass (which includes the hand-pulled ware being called "Sooner" glass) - it pretty much began when Orville Hamon brought the Scott Depot Glass Co. to Pocola, Oklahoma in the early 1950s. At one point there were dozens of related glass houses in the Pocola-Spiro-Fort Smith area of the Arkansas/Oklahoma border region, sharing molds, mold-makers, and gaffers. By the 1980s, only a few companies remained, production of this sort of glass was reduced to a trickle and essentially halted by the turn of the century.