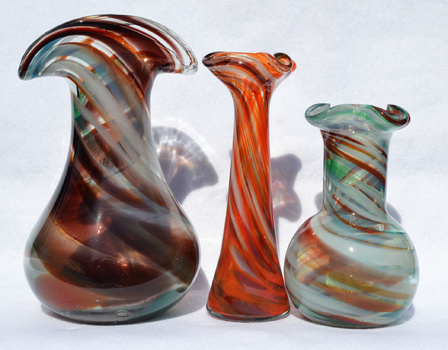 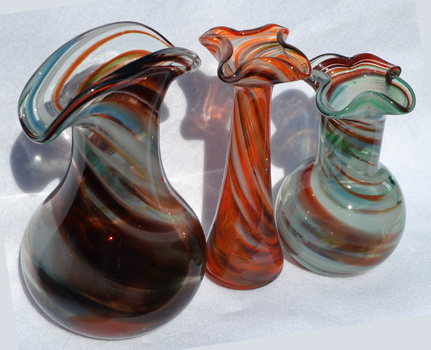 Three more examples of Ozark glass from that "Arklahoma" area - these are all unmarked, making their identification a little more tenuous. They are all mold-blown with similar styles of execution but because the companies involved were so inter-related exact attribution is incredibly difficult.
The vase on the left with the bi-directional lip (7" tall) is a shape that has been associated with Scott Depot Glass, but was most likely made by Becraft as well. Alvin Becraft worked for Orville Hamon at Scott Depot before starting his own production.
The bud vase in the center with quatrefoil lip (6" tall) could be either Becraft or Smith's Old Timer. Alvin Becraft was married to the sister of Ralph Smith, owner of Smith's. For whatever reason many of the products are essentially identical.
The vase on the right, also with quatrefoil lip (5 1/4" tall), is a shape associated with Scott Depot Glass and Rocky Mountain Glass. Located in Durango, Colorado, it's not exactly the Ozarks but it was operated by Joe Hamon (son of Orville) and made many of the same products as Scott Depot. It wouldn't be surprising to me if this shape was also made by Central Glass and Sunset Glass, companies that seem to have shared some of the same workers.
Is there more work to be done on this sort of glass ware? You bet there is. In the meantime I suggest that OZARK ART GLASS, A Collector's Guide by Curtis Martin be sought out. It was a self-marketed-by-the-author digital book on a disc sold in 2008. I have no idea how to find this now but if anyone out there knows Mr. Martin....