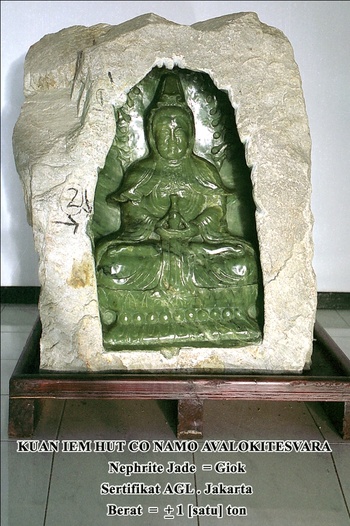 Kwan Im first introduced into China in the first century BC, along with the influx of Buddhism. In the 7th century, Kwan Im becoming known in Korea and Japan because of the influence of the Tang Dynasty. At the same time, Tibet also began to recognize Kwan Im and call it by the name of Chenrezig. The Dalai Lama is often regarded as the reincarnation of Kwan Im in the world.

Istiilah Avalokitesvara translated by Kumarajiva be Guanshiyin [2]. Later shortened to Guanyin for word the same as the word ? shi shi ? on behalf ??? Li Shimin (598-649 CE) or the emperor Taizong ???. This equation is taboo for the emperor.

Definition of Avalokitesvara Bodhisattva in Sanskrit are:

"Avalokita" (Kwan / Guan / Kwan Si / Guan Shi) meaningful Listening Looking Down or Down ( "Down" here meaning to the world, which is a natural (Sanskrit: lokita)).
The word "Isvara" (Im / Yin), means the sound (the sound of screams of creatures over their sufferings).

Jade or jade stone is a kind of " green jewel " is one of a kind gemstone of which consists of many elements of the mineral have been discovered and used by eastern nations for thousands of years ago.

At this time jade lots originating from the region of Tibet , China and Burma as an export commodity . Jade is also believed efficacious makes peace , joy and health , safety .
During the course of history after the discovery , jade has been known as an accessories and jewelry for thousands of years ago by human civilization . Even heralded as " rock saviors " even as " health stone " by tribes in East Asia and in Africa or America , including by the Mayans and Incas .

Even in today's medical world is also believed to improve health have also been used in human civilization thousands of years ago . It is widely recorded in many ancient medical books and is recognized as one of the natural energy resources . In the medical world , this stone is widely used to improve blood circulation , anti -aging , boost immunity and relieving fatigue . Jade is also widely used at the time of Ceragem massage therapy . Besides the investigation showed that jade contains many important elements such as calcium , potassium , iron and magnesium .
Jade into stone the most attractive in terms of jewelery , medical and uniqueness so that these stones also have many models depending upon the stone honed and shaped.
Our collection of sculptures with a form of the goddess kwan im , a spectacular work wari who passed very rare .
more information can contact us at midsisthree@gmail.com