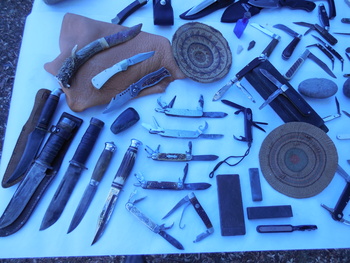 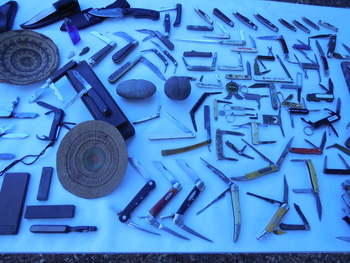 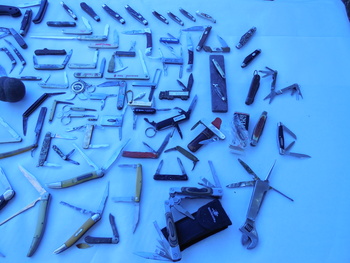 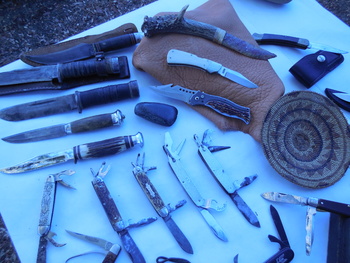 Here's a selection of some of my favorite knives. Most are made in the USA, but, there are some made elsewhere.
The first picture is mainly Military, Scout, or hunting knives.
The second picture is mainly work, fishing, or dress knives.
The third picture is mainly pocket, and advertising, and a few utility knives.
The forth picture is another angle, of the Military, hunting knives.
I've included some Native American Indian artifacts, including basket flour sifters, club and hatchet heads, arrowhead shards, and a grinding pestle, and a replica or modern handmade, deer antler and stone blade knife.
Most of the knives are, as found, some I've cleaned, and the Buffalo Brewing Co. knife, was found in the 1970's in a dump site, in the mudflats in San Francisco Bay, by Martinez, Ca., from the 1906 S.F. Earthquake, along with the small Owl Drug Poison bottle. The knife was corroded, and blades rusted away, but the brass case, I was able to save. Buffalo Brewing Co. on one side and a lady in a gown, on the other. The cobalt blue Owl Drug Poison bottle's rubber stopper was still pliable, from the mud, and a liquid was still in it, but a few days later, and the stopper was dried out, hard, and the liquid was also.
Some of the names of the knife makers are: Case, Boker Tree, Imperial, Schrade, Smith and Wesson, Remington, Cattaraugus, Buck, Western, Mora a made in Sweden fixed blade knife, Colonial, Gerber, Ulster, INOX, K-Bar, Camillus, just to name a few. :^)
**If you would like any information on anything, in the photos, let me know, and I'll try to get it, or take more detailed pictures for you, if I can!