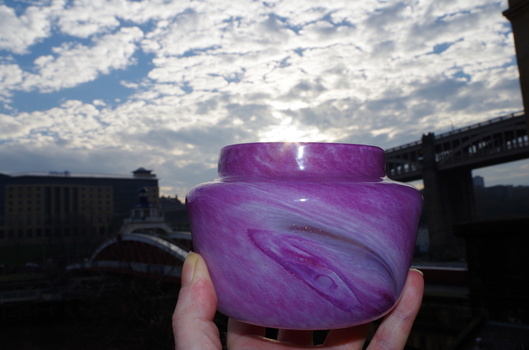 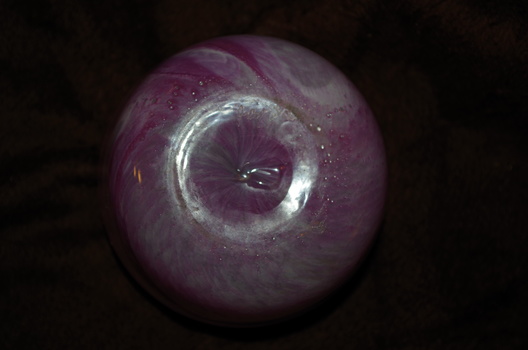 Height 3 1/2 inches width 5 inches polished pontil with inscribed signature to base Gray Stan
In 1925 Mrs Graydon-Stannus F.R.S.A. began production of glass at 69-71 High St, Battersea, London SW11. She employed about a dozen workers and serious production started in the beginning of 1926. The staff included her Deputy and Chief Designer, Noel BILLINGHURST, the Chief Blower (Day) James MANNING, the Chief Blower (Night) George HOLLINS and Cutter Mr EVERET. There were five servitors, each a competent blower in his own right, split between the two shifts.

Some early technical problems occurred with the combination of glass and the china enamels employed, due to the change of colour during the annealing process. Experimentation with the glass formulae and temperatures soon overcame these problems. Some designs were obtained by melting threads into the surface, or passing them through a succession of old moulds, to produce interesting effects.

Colours included Crystal, Opalescent, Amber, Blue, Topaz, Yellow, Green, Red, Agate, Jade and Lapis Lazuli. They were used singly or in combination and as opaque or transparent. Almost all pieces were signed: GRAYSTAN on the earlier pieces and later GRAY-STAN etched into the base.

Artistic freedom was the order of the day, and in the free atmosphere of the studio everyone involved was encouraged to produce their own pieces and to suggest new ideas. Mrs Graydon-Stannus had strong ideas about creativity and insisted that all of her glass was made by hand, going so far as to ban mechanical aids, calling them ‘the enemy of individuality’. Her motto, proudly displayed at the top of her advertisements was 'Gray-Stan does not copy it creates'

In consequence an immense variety of shapes was produced so much so that matched pairs of vases were rarely made although sets of tableware were more common. Vases, goblets, beakers, plaques, fruit sets, candlesticks, urns, plates and bowls were successfully sold both at home and abroad in the teeth of fierce competition from established glassworks throughout Europe. Gray-Stan was particularly successful in America which eventually took the greater part of their production.

Sadly, the economic climate of the thirties, particularly in America, caused the closure of Gray-Stan in 1936. Gray-Stan glass was exciting and innovative and produced some superior examples of the very best quality in design of the period.
Research by Bosch