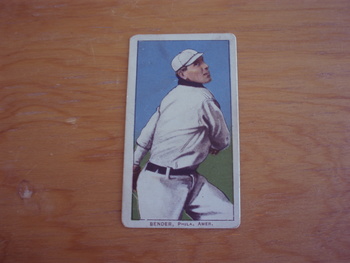 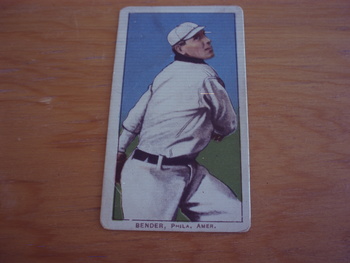 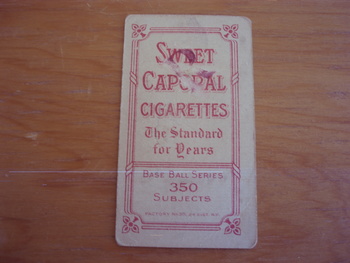 Good morning everyone,
As much as I enjoy collecting older hockey cards, being a Canadian boy from the Canadian prairies hockey was all we played when we were growing up so collecting hockey cards was natural for us.

Then one day I came across some T206 baseball cards from 1909-1911 and have become fond of their colorful history. The photos above are of Charles Albert Chief Bender who was a pitcher for the Philadelphia Athletics (1903–1914) and future HOF.

This card is of Albert Bender pitching without trees in the background. There is another card with the same pose of him which includes trees in the back ground. From what I have read there appears to be a little less of the no tree cards to be found.

Here is a brief history of Charles Albert Bender. ( Wikipedia )

After his major league playing career, Bender filled multiple baseball roles, including service as a major league coach, minor league manager and player-manager, college manager and professional scout. He was elected to the Baseball Hall of Fame in 1953 and he died not long before his induction ceremony the following year.

In 1911 he led the AL in winning percentage again (.773), going 17-5 with a 2.16 ERA as the A's won their second consecutive AL pennant, going 101-50 and finishing 13 1/2 games ahead of the Detroit Tigers. In a rematch of the 1905 World Series, the Athletics got their revenge, defeating the New York Giants and becoming the first American League to win back-to-back World Series (the Chicago Cubs from the NL had won back-to-back titles in 1907 and 1908). After losing the opener 2-1 to Christy Mathewson, though pitching a complete game, giving up just 5 hits and 2 runs (1 earned run) and striking out 11, he returned in game 4, beating the Giants 4-2 on a complete game 7-hitter, and closed out the Series in game 6 with a 13-2 A's victory. Bender again went the distance (his 3rd complete game of the series), a 4-hit performance which he gave up no earned runs (the two Giants runs were unearned). He went 2-1, with 1.04 ERA and 3 complete games in the series.
This card is not an original it is a reprint. This is good to know and helps to do research before buying old sports cards as there are many copies and forgeries being sold as originals.