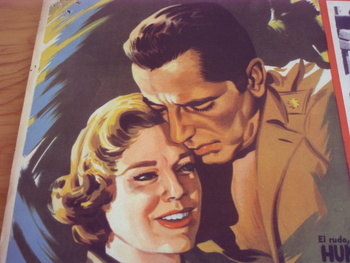 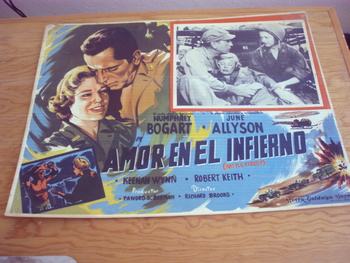 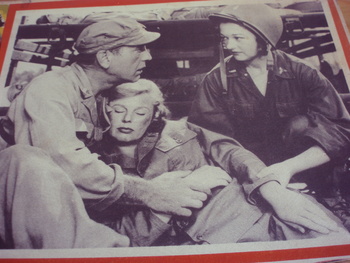 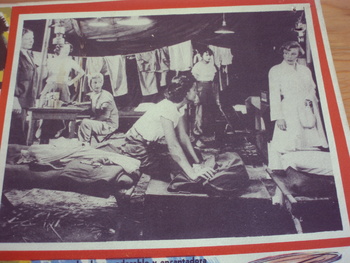 Good afternoon everyone,
Pictured above is a 1953 Mexican Lobby card ( approx. 13" w. x 16" l. ) for the movie called BATTLE CIRCUS. starring Humphrey Bogart. Despite the decision by management to change the name from the original title MASH 66 to Battle circus the movie was well received well by the audience and showed a good profit due in most part to Humphrey Bogart being the lead actor who can forget his great performance in the 1940's classic movie Casablanca. At the time the movie was produced no one knew how popular future MASH movies and TV series would become. If only the original name would not have been changed..

Battle Circus is a 1953 war film directed by Richard Brooks, who also wrote the screenplay. The movie stars Humphrey Bogart and June Allyson, and costars Keenan Wynn and Robert Keith.

The film is set in Korea during the Korean War. Bogart (in his sole film for Metro-Goldwyn-Mayer plays a surgeon and commander of Mobile Army Surgical Hospital (MASH) 8666 (shortened to "66" in the dialogue), with Allyson playing a newly arrived nurse. Despite their initial handicaps, their love flourishes against a background of war, enemy attacks, death and injury.

PRODUCTION: Wiki
According to Richard Brooks (in an interview filmed for the 1988 Bacall on Bogart documentary), Battle Circus was originally called MASH 66, a title rejected by MGM because the studio thought people would not understand the connection to a military hospital. The title of the film actually refers to the speed and ease with which a MASH unit, with its assemblage of tents, and portable equipment, can, like a circus, pick up stakes and move to where the action is. The film's technical advisor, Col. K. E. Van Buskirk had commanded one of the first MASH units in Korea, and ensured that the MASH and aerial scenes were authentic.