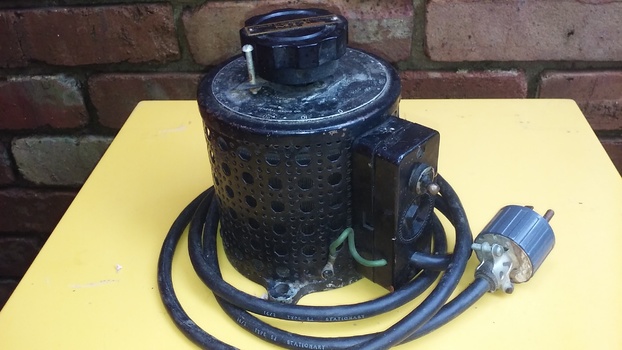 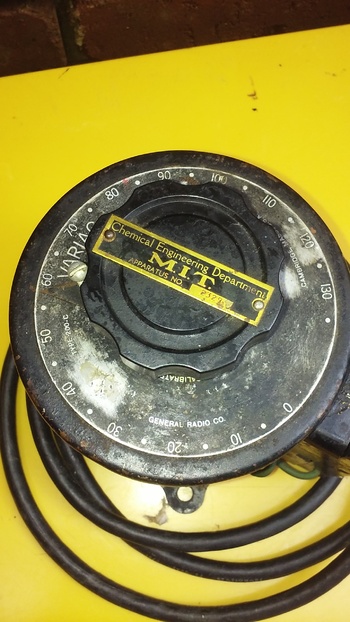 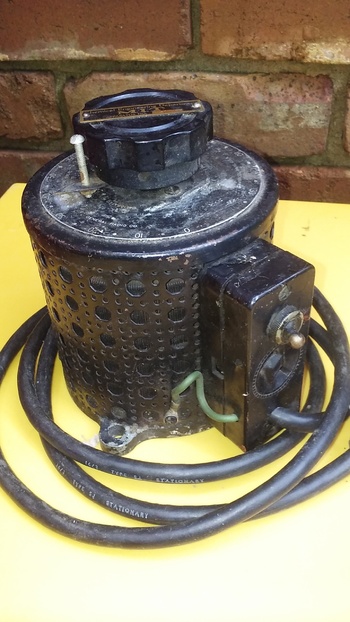 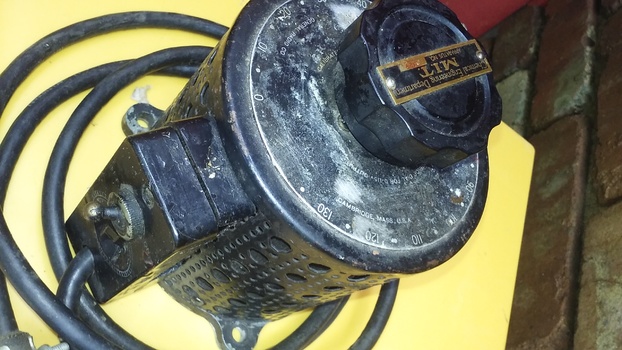 This item was a rather accidental surprise (or should that be -priZe?) ultimately scored from an eBay auction a few years ago.

Electrically, a VARIAC is essentially a heavy duty 'adjustable transformer' capable of providing 0 - 130% (or so) of normal wall outlet voltage to any other electric thing plugged into it (think of it as a large "light dimmer") which (in this format, as a standalone device) is generally used as a piece of test equipment on the workbench. In the 'pre-digital' eras of electricity/electronics anyway (not so much now) a VARIAC was an indispensable item for the TV repairman (at least), similar units were (and are, still) also frequently used to regulate electrical heating devices (soldering irons, hot plates, yada yada) in industrial settings like research labs and factories.

[in our now 'digital' era, one can still use a VARIAC to perform interesting/amusing 'experiments' to find out how things 'fry'...but that's another story not topical here... ;-) ]

ANYWAY. I was looking for one (for my own workbench) and the seller showed pics of a newer (1960's?) unit (just like I was looking for) while mentioning he had several for sale, with those ominous words "item pictured is typical". <groan> The price was right so I bought it anyway, and was actually delighted when the box arrived and I found this *much older* (1930's, maybe?) unit inside -- even more so with its brass nameplate attached identifying it as former property of (what I presume is) the MASSACHUSETTS INSTITUTE of TECHNOLOGY Chemical Engineering Department -- EXCEPT that it hadn't been packed so well and ultimately had suffered slight physical damage in shipment (broken bakelite switch/plug housing, I have the piece) and also had a defect in its inner mechanisms (which may or may not have been due to the handling) so it didn't really work right anymore either. :-(

The story ended well -- once I contacted the seller and reported the damage, he volunteered to send another unit at his expense without wanting me to return this one -- and the 2nd one to arrive was not only packed VERY WELL, but also nearly identical to the pictured unit I'd expected to receive and in perfect operating condition -- that one now lives, in fact, on my workbench exactly where I wanted one in the first place...!
:-) :-) :-)

[edit] the cord and plug now attached to this are obviously replacements of its originals, but are of high quality which would be expected from the maintenance dept's of an institution such as MIT...?]