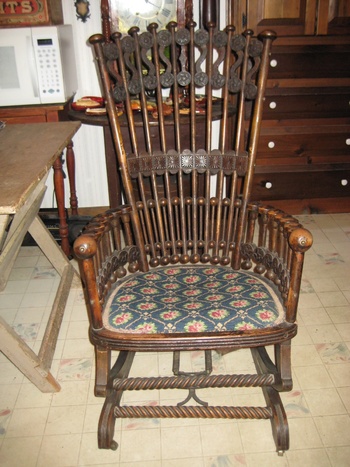 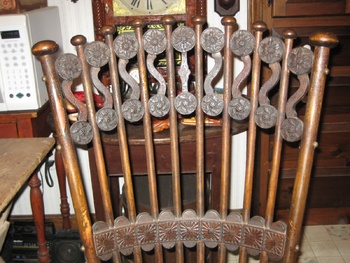 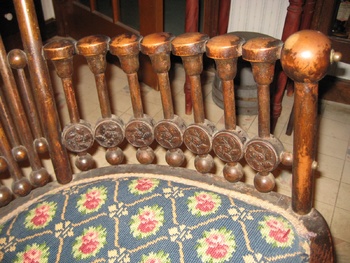 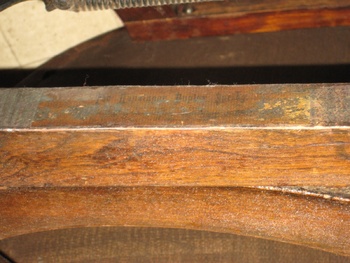 Included were pictures of Hunzinger's "lollipop" chairs. In a way, these were the ultimate in stylish factory made mass produced furniture. Basically repeating turned parts assembled using a brass rod which tied the parts together. Some of them were further embellished with applied elements which were also mass produced by pressing the design into a composition material.

I thought I would post pix of a my Hunzinger lollipop rocker which I think has all of the bells and whistles. It is similar to an example in the Wolfsonian collection which was included in the landmark 1997-1998 exhibit of his furniture at the Brooklyn (NYC) Museum, "The Furniture of George Hunzinger: Invention and Innovation in 19th Century America". See the catalog of the same name, page 119, figure 139. I, however, believe that my example is in some ways more fully realized though some may argue less "pure" and more decorated and fussy representing more of that Victorian sensibility?

The upholstery on my chair is old but I don't believe it is original. Someone spent some time making that needle point seat. The finish I do believe is original and overall the chair survives in very good condition with the appropriate wear through use and other signs of age. It still bears a paper Hunzinger label. Hunzinger also used a die stamp to mark his furniture.