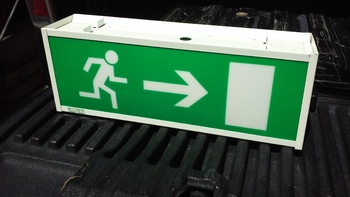 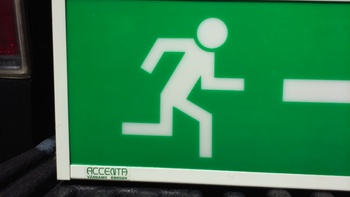 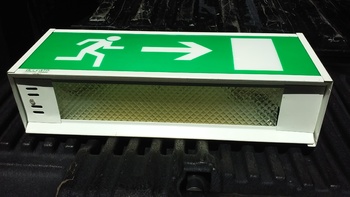 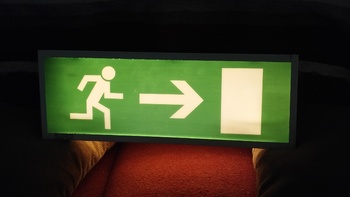 Here's an item recently added to my collections via the incredible kindnesses of several friends who are members of another collector's forum I belong to -- who first saved the sign during an office building lighting upgrade someplace in Sweden then managed to get it transported to the USA, where it then passed thru a few more friends and places until finally landing on my doorstep. <cheers, applause>

This is a (symbolic man running towards door) EXIT light made by ACCENTA of Varnamo, Sweden. Their "typ 708-22', it originally had a small fluorescent light tube and ballast in it (and some kind of small battery backup device) that operated on 230v/50hz (incompatible with USA power) which were removed for lighter shipping, though the original sockets and wires are still in there. I have now added a short strip of LED's inside to light it up for display. Its front 'graphic panel' is made of plastic, and it also has a plastic diffusing panel inside its bottom to cast some light on the wall (or whatever) underneath the sign.