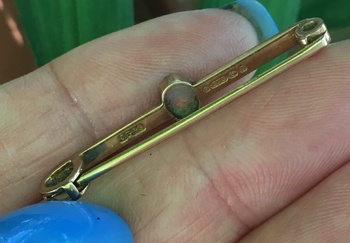 This is a John Grinsell & Sons rose gold solid Opal tie pin, I think it's a tie pin, the date mark is for 1912. In the photo's I've tried to show the opal change of colours, it weighs approx 8 grams. I've looked them up on line and they made just about everything from jewellery to decanters.

John Grinsell & sons - originally Grinsell & Bourne, the business took on this name in 1871 after the original partnership dissolved. They were manufacturing silversmiths based in Birmingham.

John Grinsell went into business with his four sons in 1871 and they had manufacturing workshops in Birmingham as well as show rooms in Holborn Circus, London and in Glasgow.

They made a range of silver-mounted glass and stonewarm, included lock-up liquor frames, biscuit boxes, butter dishes, cups, cruet frames, flagons, and salad bowls. They registered their trademark a Cupid standing on a scroll in 1879.

Around 1905 they registered as a limited company under the name John Grinsell & Sons Ltd. They were later bought by Barker Ellis & Co. Ltd which finally went into administration in 1992.