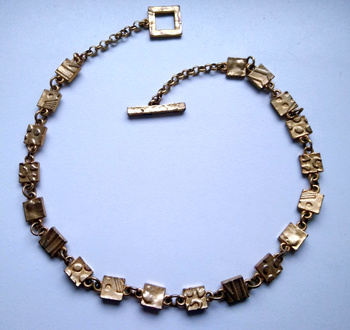 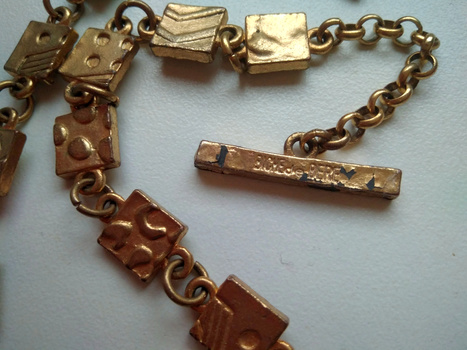 Flea market find from today, this 1980s signed necklace is a gorgeous piece of brutalist costume jewellery by French designer Nelly Biche de Bere. There is some plating damage on the closure, still a good investment for my 50 cents :)

Nelly Biche de Bere (born December 5, 1964), French designer and founder of the brand Biche de Bere. She graduated from the l’Ecole Supérieure de Design Industriel of Paris and the Pratt Institute of New York. Nelly Biche de Bere has been liken to visionary individuals such as Chanel, Jean Paul Gauthier, Karl Largerfeld , and Philipe Starck.
In 1986 she founded her first brand: Biche de Bere which specialized in haute-couture jewelry, clothing and accessories. Nelly Biche de Bere was named personality of the year and received 1st Prize for Best French designer in China at the hands of Pierre Cardin. She has been exhibited in major museums such as the Museum of Modern Art in New York, San Francisco and Tel Aviv, The Whitney museum in New York, The Grand Palais and Centre Georges Pompidou in Paris

This is a fantastic gold plated necklace by the French artist, designer and modernist Nelly Biche de Bere. She produced high end costume jewellery from 1973 until 2007. Here we have a gold plated necklace made up from 19 individual linked squares. Each square has a patterned modernist design on it. The squares link together with loops ending in longer chain parts with the BICHE de BERE signature on the bar clasp. Measuring approximately 48 cms in length and with each panel being 1 cm square this is a striking necklace. This vintage necklace dates to the 1980s to 1990s era. It fastens in one position only with an large open square clasp that you simply pass the t bar clasp through.
JEWELLERY DETAILS
Designer or Brand: Biche de Bere - Nelly Biche de Bere
Country of Origin: France
Decade: 1980s to 1990s
Style: Modernist, Designer
Era: Vintage
Type: Collar Necklace
Material: Gold Plated Metal