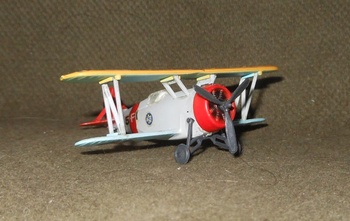 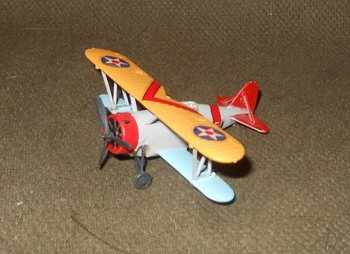 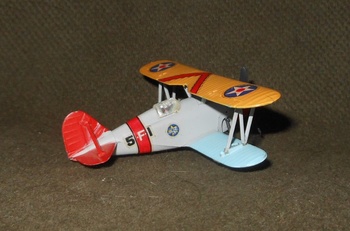 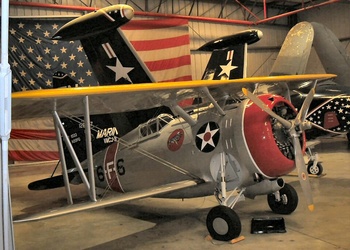 I know I said I was going to post WWII mini-planes next but I thought this would be a good segue plane. This was the last biplane used by the US military, this one was a Navy plane. First made in 1936 and served until 1941, only 147 were made. This may seem like a very unimportant plane but it is the direct ancestor of the F4 Wildcat. Check out the landing gear in the last photo which is the 1:1 version (located at the Planes of Fame museum in Chino). It has a top speed of 245 MPH, twice as fast as a WWI fighter but almost twice as slow as the WWII fighters soon to come. Also the armament was a bit archaic, a .30 caliber and .50 caliber machine gun firing through the propellers just like a WWI fighter. Although the .50 wasn't around in WWI . It did have retractable landing gear and an enclosed cockpit which were major advancements over WWI planes.
As for this model it is one of the best detailed of the mini-planes. The machine guns can be seen poking out form the engine cowls.
I do have a couple more of the pre-war fighters should there be any interest.