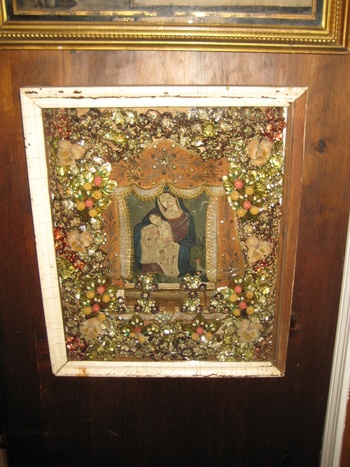 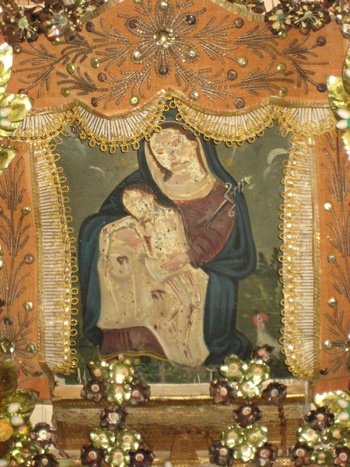 A retablo was a devotional work originally placed behind the alter of a church or cathedral. The subject matter might relate to Christ, the Virgin Mary, the Saints, etc.

When behind the alter of a church or cathedral, they could be quite monumental. Over time, smaller versions were created for use in the home and I suppose smaller churches, chapels, etc. Their use was especially popular in Mexico, Central and South America. I suppose they were also used in the S.W. US which was once a Spanish Territory. They were typically the products of painters and craftspeople without formal training. They are considered "folk art" and collected and valued as such.

I will say that the term retablo is often applied to folk paintings on tin created to give thanks for divine intervention for any number of things, e.g., surviving an illness, car crash and overall an amazing array of bad things that might happen to people. These are in fact ex-voto paintings. Yes, some refer to them as retablo ex-voto.

This is a retablo. Rather large and impressive in a shadow box frame.

What I especially like is the painting on tin in the center. It is a piedad in Spanish. The term is more familiar in Italian, a pieta. Traditionally, the elements of a piedad/pieta are the Virgin Mary depicted as the Mater Dolorosa (note the sword piercing her breast which refers to Luke 2:35) grieving over and cradling the body of Christ shortly after his removal from the Cross. As is typical of these depictions, blood is shown to be flowing from his stigmata. There are other symbols of his Passion including the crowing cock.

Especially interesting to me is how the Christ figure is child sized and shown disrobed. It would be very easy to substitute the Christ Child in the painting depicted pretty much the same way. I don't think this was just an untrained artist getting scale and perspective incorrect. I believe it was intentional and refers to the maternal qualities of Mary both at the beginning and end of his mortal existence and impending rebirth or resurrection?? I'm not a theologian.

I date the painting on tin from the early to mid-19th Century. Love the needle work, foil flowers, wax fruits, and so on. I believe it to be Mexican? Could be Central or South American. The shadow box frame is later. I date it from the early 1900's. My basis for that is the materials and nails used. Furthermore, the piece is backed with and the frame was stuffed with a 1905 newspaper from Lowell, MA. Lowell was a destination for many immigrants seeking work in the mills and factories that would have been booming at about that time. Yes, a piece of molding is missing from the viewer's right side. It's a basic molding and I think that I can find a similar piece with patience.