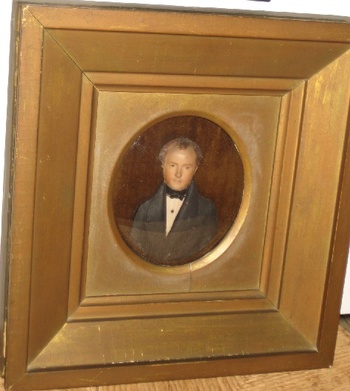 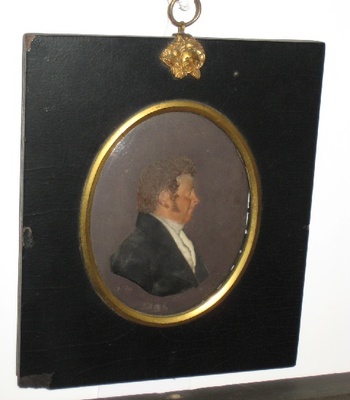 Wasn't quite sure what category to post these as they are miniature portraits.

For many years, portraits, both while the subject was living and after, were quite popular.

Small sized portraits or miniatures were especially so. Some where small enough to be contained within a piece of jewelry such as a locket or broach. A memento, like a lock of the subject's hair, may have been included. They were also created to be enclosed in small cases.

These miniature portraits were painted in oils or watercolor upon a variety of materials including paper and thin pieces of ivory.

In my experience, a much less common medium was colored wax. The use of colored wax produced a 3 dimensional portrait miniature. Now, some of these "wax portraits", for example, some of popular or classical figures, were almost mass produced. What I am referring to was the creation of amazingly detailed 3 dimensional miniature likenesses of real people using different colors of wax. Some feel they are eerily life like!

The first is actually a 3/4 profile of a gentleman. The detail of his face, clothes, etc. is quite amazing. The actual portrait is mounted on glass backed with brown velvet all contained within a gilt frame. I believe it to be mid-19th century.

The second is a profile of another gentleman. Again, the detail is astonishing especially when one considers the rather small size of the portrait. It is mounted on slate all contained within a papier mache frame. I believe this to have been created earlier in the 19th century based upon his hair style and style of dress.