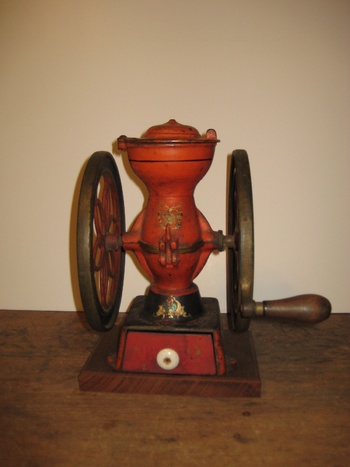 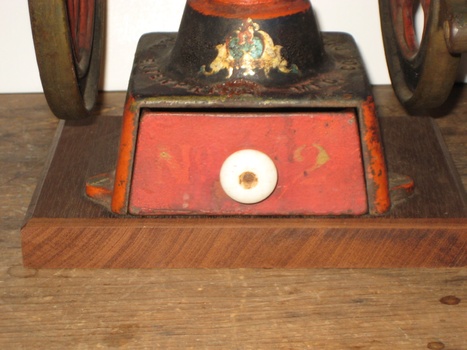 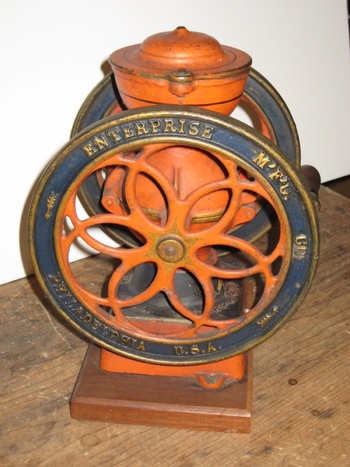 In the days of the "k-cup", it's a bit hard to believe that once people ground their own coffee beans.

After the Civil War, there was in increase in per capita coffee drinking in this country. There were a number of American companies providing commercially made "mills" or grinders for use in the home.

They might be made for use on the table top, clamped to a table top or mounted on a wall.

One style of mill, in the collector's parlance, was the "upright". It was made from cast iron and might have been used on a table top with the larger models being free standing. There was a hand crank to drive the grinder. They might have no, one or 2 fly wheels. There was a thumbscrew to adjust the coarseness of the grind. The ground coffee would drop into a drawer of cast iron or wood or a tin cup.

I like these mills as they were produced in a variety of pretty colors enhanced with added pinstriping, stenciling, embossing and painted or transfer decoration. My preference is for the smaller table top models with 2 fly wheels. The free standing models can be quite large and heavy.

As mentioned, coffee mills were produced by a number of American companies. One such company was the Enterprise Mfg. Co. of Philadelphia, PA. They were active from about 1873 to the 1930's.

Pictured here is their "No. 2" model. The original paint and transfer decoration survives in nice condition. The wear is "right" and appropriate. Repainting or restoring these destroys their value. The drawer is present and undamaged. The original porcelain pull is undamaged, too. And it works!

I've owned a number of similar models by other makers over the years. I know the trend is for the modern "open concept" almost sterile looking kitchen. Phooey. I love having this decorating the counter along with other "kitchenalia". By the way, I still grind my own coffee each time I brew it. My one concession to modernity and sanitation is to use a small modern electric grinder.