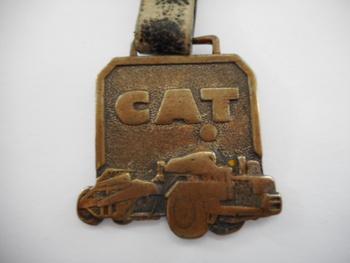 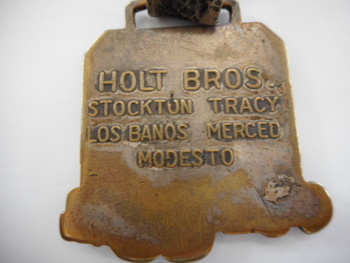 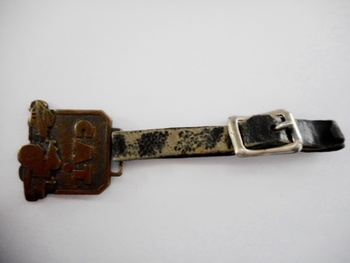 Rattletraps post on a 1920's Two-Ton Cat Crawler brought back memories of Holt Manufacturing & Benjamin Holt with the beginnings of the Caterpillar Tractor (https://www.collectorsweekly.com/stories/264357-1920s-two-ton-cat-crawler?in=activity).
In 1883 the Holt Brothers formed the Stockton Wheel Company manufacturing coach & wagon wheels and carriage bodies. In 1890 Holt built his first experimental steam traction engine, nicknamed "Old Betsy". In 1892 Holt manufactured a steam-driven tractor capable of hauling 50-short tons at 3-miles per hour.
During World War I, Holt tractors were used to replace horses to haul artillery & other supplies. Holt tractors were also the inspiration for the development of the British & French tanks. By 1916, about 1,000 of Holt's Caterpillar tractors were used by the British in WWI.

The photo of the Holt Manufacturing Company in Stockton, CA., is from 1908.
The pocket watch fob is dated around 1962 of a CAT DW 2, with the obverse side inscribed:
Holt Bros.
Stockton Tracy
Los Banos Merced
Modesto

A lot of history can be found on Benjamin Holt & Holt Bros. Manufacturing.
Dave