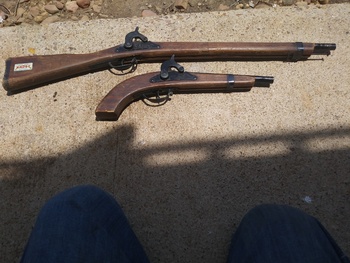 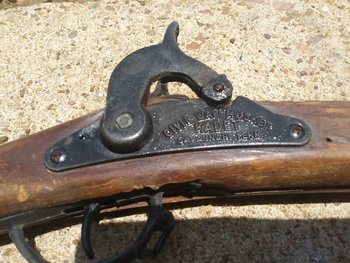 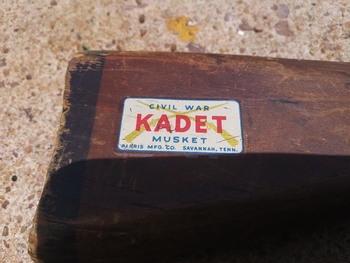 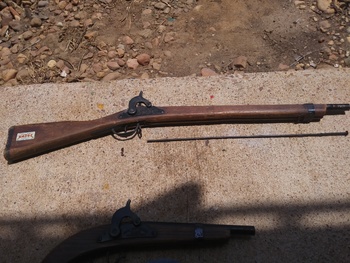 Just got this Parris Mfg. Co. Kadet Civil War musket and pistol. I had the musket in the early 60's and I remember seeing the pistol. Some of you may be more familiar with the wooden bolt action "Springfield" looking Kadet training rifle that came with a manual of arms/ catalog so you could learn to drill. The early ones in the 60's had a gold painted wooden bullet, the 70's and later have a plastic bullet. Parris actually made thousands of training rifles for the Armed Forces in WW II. They made different levels of rifles for drill teams etc. also. In fact we used ones with chrome instead of black metal on our AFJROTC Drill Team in high school.
From what I've read they only offered the musket/pistol during the Civil War Centennial. This is first time I've seen either of these since I was a kid. I see the old training rifles often, they were more popular and made longer. The rifle is in rough shape, but surprisingly has the ramrod and the action functions great. It's 26 1/2" long, it seemed a lot longer when I was in elementary school. The pistol is in pretty decent condition, but unfortunately missing the ramrod. These were cap fired and came with some cork "minnie balls" in a little bag I remember. The Kadet rifles were made of wood snd metal, they had a cooler looking tough look than the other plastic toy guns. Nice to find another toy from my childhood especially since it is ACW oriented.

Thanks for droppin' in,
Toyrebel