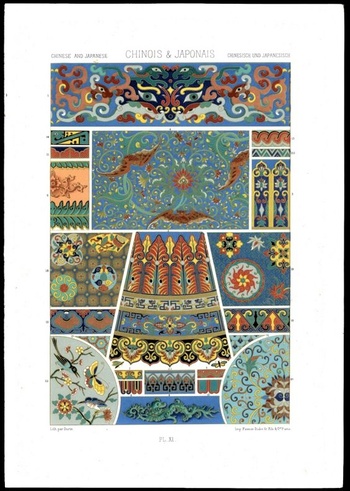 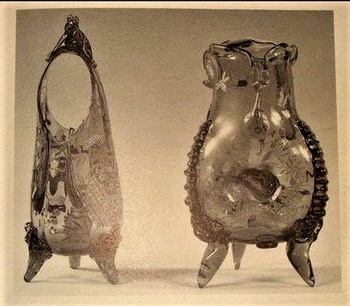 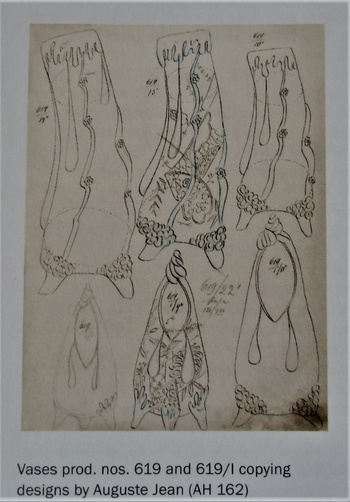 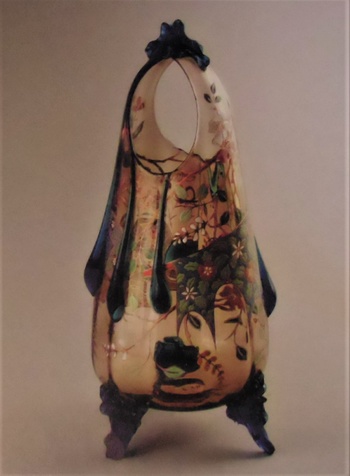 Before I write this post, I have to acknowledge that I am still newish at this topic of antique glass, for what is for me a fascinating topic, will be old hat for many members of CW, that are long term and serious collectors and have been aware of this information for many years.

It is about my learning of the connections formed and the events that followed, in the trends and designs of Art Glass for the 1870s period. I do have an advantage with Japanese artistic antiques, as I have delve with this subject for close to 20 years, and the French connection is easy for me to find and read, as I am French Canadian. Schooled in French till college.

There is a post I composed already about Auguste Racinet, 1875, due to my large print of one of his lithographs, which depicts the Japanese cloisonne designs from the mid to late 19th century. There is a bit of humor here, as the page for Chinese and Japanese designs was combined, and the portion that was used by Auguste Jean and Harrach is a Chinese decor not Japanese. You can also consider that the Japanese themselves copied Chinese decorative garlands and bands during this same period.

The style trend of Japonism (and Chinoiserie) in France was a strong influence and inspiration following the Paris World Fair of 1878. Japan was only beginning to participate in these exhibitions. Their aesthetic and art work was novel, exotic and highly appreciated.

The book "From Neuwelt to the Whole World 300 Years of Harrach Glass", on page 240, discusses Racinet's art work and footnote 411 mentions Jean and Rousseau and their influence on Harrach decorative glass in another chapter. Written by Jan Mergl.

"Today’s Harrachov Glassworks Nový Svet was founded in 1712 and is thus the second oldest glassworks in the Czech Republic. The tradition of high quality blown, cut, painted or variously decorated glass, including handmade production has been preserved until today.

The Harrachov Glassworks was owned by the noble Harrach family until 1946. It was then taken by the state, which sold it to a private owner in 1993. With the rapid growth of the tourist industry in the Krkonoše Mountains after 1989, the local glassworks also became a tourist attraction, where tours and displays of traditional glassmaking methods are organised. The glassworks complex includes a museum of glass and a small brewery.

The glassworks has always produced expensive luxurious drinking and decorative glass. Throughout the years, it managed to adapt to new trends and technological procedures. Glass from Harrachov has decorated the tables of e.g. Queen Victoria as well as the Russian Tsar. Today, people are more likely to encounter this glass abroad than in the Czech Republic as 95% of glass from Harrachov is produced for export."

"This was a benefactor, patriot, politician and great manager, count Jan Nepomuk František Harrach (1828 - 1909). At the count's request, rebuilding of the factory was commenced immediately after the fire. The production was restored as early as on February 6, 1863! The glassworks became an integral part of a economic program that aimed not only at increasing the earnings of the manor farm estate as such, but also at the overall development of the entire region.
These efforts are well expressed with a statement given by the count in a debate at the land council: "We shall excel with our work both in culture and economy, otherwise other nations would fail to hold us in high esteem. And that is why I keep my glassworks in Nový Svet although it is not profitable. It maintains and spreads good reputation of the Czech glass-making industry in all cultural countries, even overseas."

I would like to also give the names and the dates of the important people involved in this article, during this specific time period.
There will be a follow up CW post article, concentrating on Ludwig Moser and Harrachov.

A google link that illustrates how difficult it may be to identify, the Jean, Harrach and Moser decorative glass from the 1870s and 80s that were inspired by Jean, all of them made very similar decorated glass.