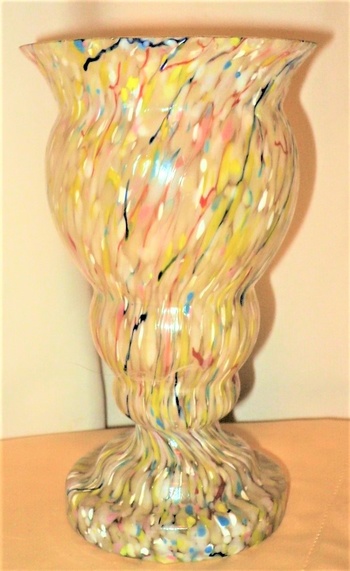 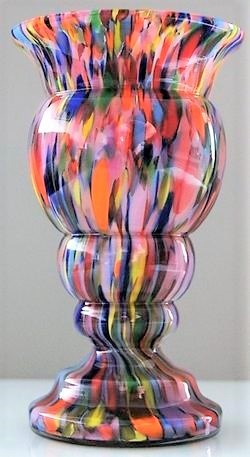 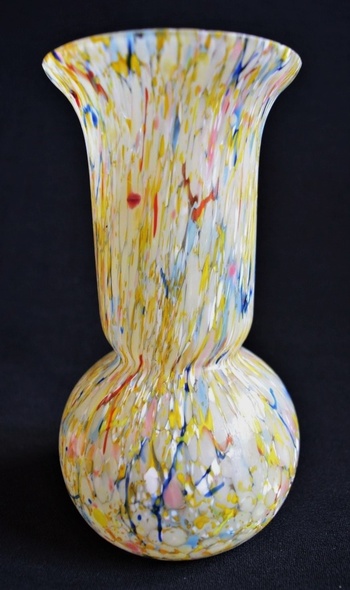 We have had this decor on our minds for several years, I won't say who because alliances change, or some people want to remain anonymous, and it's not relevant to my post. This discussion followed the diamond bubble decor, which was deemed Loetz at the Passau about 2010, then as unknown, then we made some connections to Ruckl with shapes of the bubble decor, and finally this almond mini spatter decor also had one shape we could tie in.

There was an almond cream background, and a light blue background, the mini spatter pretty much the same, in the same shape as one of the bubble glass vases. Last week a seller had a vase in the back of a group of glass vases on his listing, items from his mother's estate, it was not for sale and seemed much like my almond decor vase.

I wrote and asked if he sold it, he decided not to sell it after all, and keep it instead, but agreed to send me an image and allowed me to use it. I was shocked to see it was one of my Ruckl vase shape's, and happy to add this new decor to the wide range I already have.

There is another potential decor which shows up in a mini red spatter on white, which I have also discussed with another member 3 years ago, I could not confirm any producer, but knew there were several which all had the potential to be Ruckl. Until I can document the red one it will stay as a maybe, the member in question may want more information and remain anonymous as well.

One of the Ruckl aspects of production for Czech era glass is that the volume was limited and the number of decors used on the same decorative shape were also limited compared to other producers and exporters of the same time period. This makes it more difficult to identify pieces, unless it's a glass lamp or shade, as we know, there are many that had the same shape, according to the catalog pages provided by the Truitts. This maybe also true for perfume bottles.

Image 1 is the new decor with permission
Image 3 is the same decor, which were comparing to one of the bubble vase shape
Images 2 and 4, are mine, and missing a yellow one with white casing.