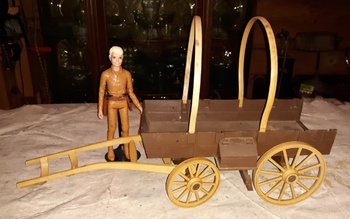 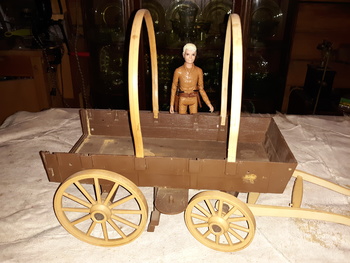 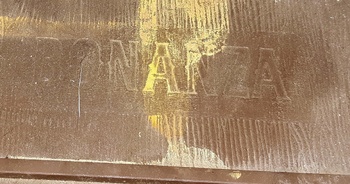 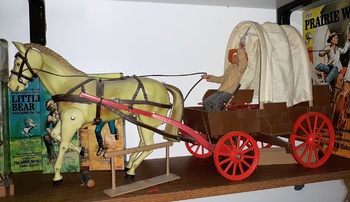 American character was a company that made dolls mostly. They started in 1919 I believe and the company went out of business in 1968 which would put this toy about from 1966 to 1968. This is the Bonanza four-in-one wagon from the Bonanza TV show series. As this is called the four in one wagon there were four variations that you could make of this wagon there was a covered wagon, a Chuck Wagon, ore wagon and a buckboard. Later on this re-released by Gabriel as the Lone Ranger 4 in 1 Wagon.
The Bonanza series I believe were 8" figures featuring Ben, Little Joe and Hoss. As Pernell Roberts left the show his character got a mustache as was turned into the villain.
Not a whole lot is left of this wagon but it is decent enough for a display as is. Jay West is there to show the scale is a bit smaller but it will work. Wagons were not very big but if you ever see the show Wagon Train they have even more room than the Sea View or all those huge air vents that everyone escapes into. I like the color on this one a bit more than the Gabriel version so hopefully I can get a seat and make it a viable wagon. I can use other parts from my Gabriel wagons. We shall see how that goes.