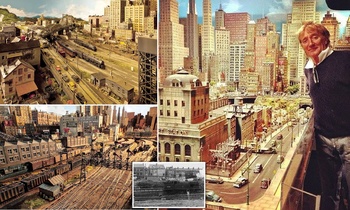 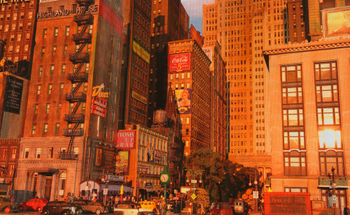 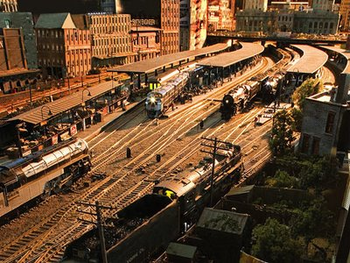 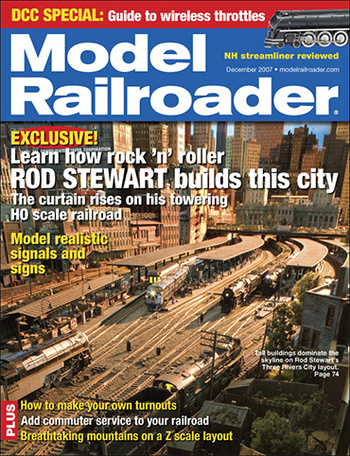 My CW friend and Bama Buddy Brunswick(Thomas) recently posted a Rod Stewart record lately. Another good CW friend and toy collector guru Ftapache commented about Rod having a train layout. He's got a layout all right, 1500 sq. ft. of it!
Desspite being a gazillionaire and he afford could to have the best layout builders do the work, he did 90% of the work.
I've always liked Rod and loved his music, but I'm really impressed with this and I have an even greater admiration for him now. The following is a write up from the Los Angeles Magazine Well done Sir Rod!

Los Angeles Magazine
Home Celebrity
rod stewart model railroad
Here is Rod Stewart with an eagle for some reason
Marco Rosi/Fotonotizia/Getty Images
CELEBRITYL.A. HISTORYL.A. HOMEMUSICPOP CULTURE
Wholesome: Rod Stewart Has Spent Decades Building an Elaborate Model Railroad in His Beverly Hills Home
Some guys have all the luck. Some guys have all the trains.
By Chris Nichols -November 13, 2019
Rod Stewart has a star on the Hollywood Walk of Fame and a Grammy. Could his next accolade be the Golden Spike Award for model railroading? The 74-year-old singer recently revealed the enormous train layout he’s been building for the last quarter century in the attic of his Beverly Hills home. The collection of tiny locomotives chugs through a very dense urban landscape crafted by Stewart and inspired by Chicago and New York rail lines as they looked when he was born in the 1940s.

The singer created many of the buildings while traveling on his last 19 tours. He rented additional hotel rooms and had the beds removed and ventilation fans installed so he could sculpt and paint and artificially age the bridges, warehouses, and rock outcroppings. He added simulated rust and sprinkled tiny bits of garbage in the streets. Some of the skyscrapers are the size of people and scuffed with black chalk for even more grimy authenticity. The entire layout is 1,500 square feet, more than twice the size of a typical apartment in Los Angeles. Stewart’s home also houses his collection of Roman busts, Regency furniture, toy Scottish soldiers, and Ferraris. The model is surrounded by an eternal traffic jam and bathed in the golden light of early evening. (The BBC has photos here.)

He unveiled the layout, called Grand Street and Three Rivers City, in the December issue of Railway Modeller, which bills itself as “Britain’s most popular model railway monthly magazine.” Sir Rod told the magazine, “A lot of people laugh at it being a silly hobby, but it’s a wonderful hobby.” Silly and wonderful.