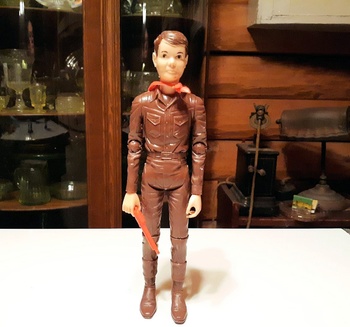 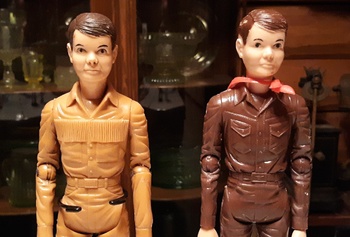 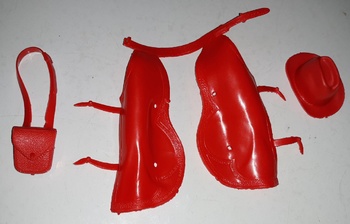 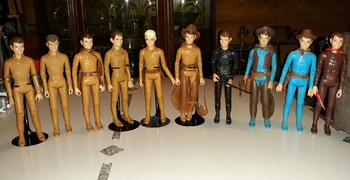 The Johnny West Adventures Series were the last and most valuable of the Johnny West series of figures. This one is a Jamie West which is Johnny West's son. Normally a Jamie West came with the blue body as seen in the last photo. Note only was it molded in the blue color it was supposed to be the fringe shirt as seen in photo #2. There is also the possibility that this was sold as a Jay West with the wrong head. The red accessories would be those that went with a Jay West figure as would the body color and style.
In the last photo I have 10 variations of Jamie West. The caramel color was the original color. The original version had the arms held on by an internal piece of plastic. This was replaced by rivets later on which were much stronger. There is a Canadian issue Jamie which had a slightly different caramel color. In the3 last photo there is also a Jamie with Jay head but the hair is painted brown. There is also an example of a Jamie head painted blond to be sold as a Jay West. There is a Canadian issue Mod Color Jamie in black. There are four variations in the black body as it came with either the snap or fringe shirt and either rivets or no rivets shoulders. The black is a good color but I am not going to worry about getting all four. Next are the Johnny West Adventure series which should be blue with the fringe shirt. But I have another with the snap shirt. Show of hands to show how many of you have suffered brain melt while reading this. What I don't have is the UK red haired Jamie. To continue the brain melt there were also some mail order sets with Jamie. I have the buckboard set but he is not in the photo. I double dog dare anyone to have all the variations.