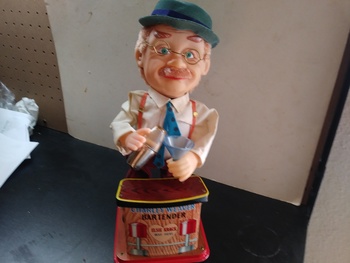 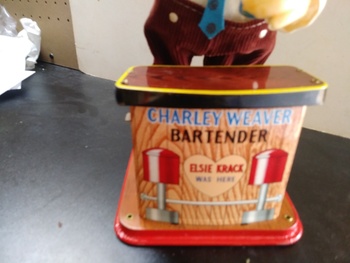 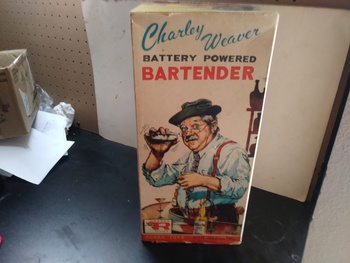 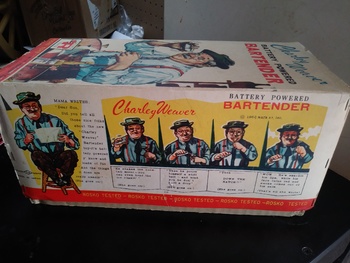 Just got another self funded Christmas present. It's another toy I had as a kid. My father gave me one of these in the early '60's.
It's a Charley Weaver battery powered Bartender made by Rosko Toys, Japan with 1962 on the box. He's 12" tall. When turned on he shakes his shaker a few times(it even has blue plastic ice cubes inside it). He then pours the contents in his glass and raises to his mouth. When he lowers the glass his face turns red, he smacks his lips, and then he blows smoke out of his ears! Surley that would be enough for anybody, but not for Charley, he repeats the cycle until he's switched off or his batteries run down, just like me! I've had a few Japanese made battery ops over the years, both as a kid and as a collector. This has always been my favorite, I guess The Musical Jolly Chimp with the cymbals that grimaces when you push his head down would be second place.
Charley was the invented Character of Cliff Arquette(grandfather of Rosanna Arquette and her siblings) on the Jack Parr show in the '50's. His gig was to read "Letters from Mamma" about the imaginary small town of Mount Idy. Most of us remember him on the bottom left corner of The Hollywood Squares. He was a guest on Carson and would read the letters on up through the '80s.
One of the best ones was this; "Your uncle was milking the cow when he fell over backwards down the ravine.....don't worry, he's fine, he held on!"
Merry Christmas CW'ers!!!
Rebel Bill