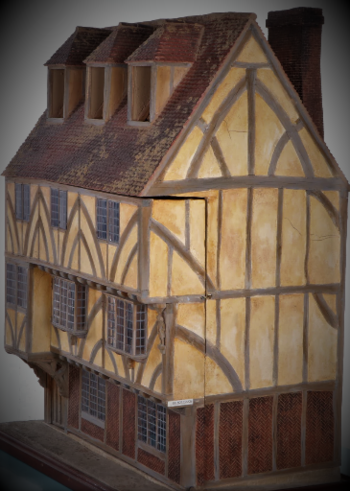 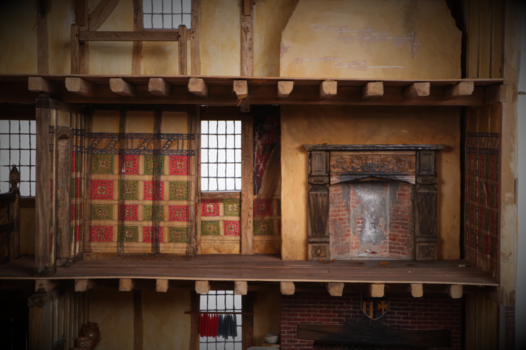 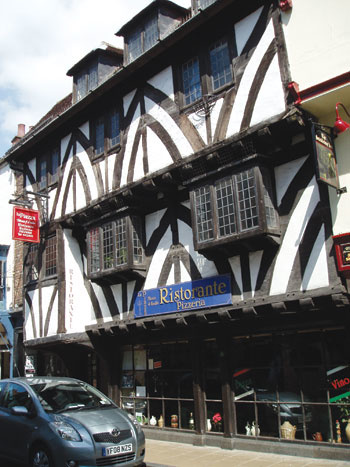 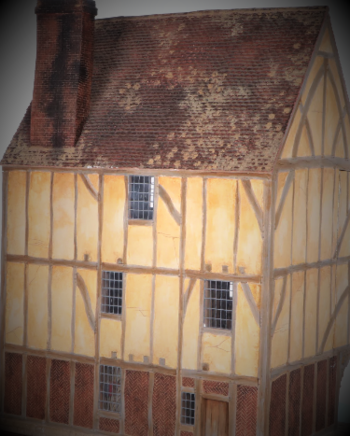 Goodramsgate Tudor dollhouse by Peter Mattinson. This custom, hand crafted model house depicts a classic English Tudor style building with half-timber exterior, red brick ground level, and terracotta tile style roof. The interior exhibits other late medieval architectural details like the red and green decorated main room with its carved fireplace mantle board, large fireplace in the kitchen, hanging candles. Plaque on the side of its base reading “Peter Mattinson York, England”.
From the internet regarding the actual building/house:
Originally a large timber-framed building running some considerable distance back from the street frontage, and built in the late 15th or early 16th century to a height of three storeys. The upper floors are jettied on the front, but not at the rear.
The front elevation is particularly attractive with its downward curving timber braces arranged in pairs. These were revealed during the restoration work of 1929 when the rendering was removed, and the building extensively restored by the architects Brierley and Rutherford. Though dormer windows were inserted in 1929 there are in fact no attics, the second floor being open to the roof.
The property was restored at the instigation of Mr Cuthbert Morrell in circa 1932 and transferred to the ownership of this Trust in 1957. The building was for many years used as a café, and is now a popular Italian restaurant.
From the internet:
Higher-status houses
York Conservation Trust purchased No.60 Goodramgate in 2001 and owns several other historic houses in the street. The higher-status houses are on the east side of the thoroughfare. Nos.43 and 45 were acquired by Cuthbert Morrell in 1931-2 and were transferred into the ownership of the trust in 1957. No.45 is an impressive three-story house dating from the late 15th/early 16th century with jettied upper storeys and expressive timber framing which was exposed in a restoration undertaken in 1929 by architects Brierley and Rutherford. There are oriel windows on the first floor; the dormer windows were added in 1929 although there is no attic floor.
From the internet:
Number 45 Goodramgate is a late-medieval half-timbered building that dates back to the late 15th or early 16th century: early Tudor, in other words. It would probably have been the home of a wealthy York citizen, with a shop in front, says Philip. And this splendid, high-ceilinged room would have been the dining hall.
The charms of 45 Goodramgate don’t end with this room. There is another seating area upstairs, reached by a twisty timber staircase. Like the dining hall, it is full of old timber beams, and there is a lovely deep-set window with what was possibly once a window seat looking out over Goodramgate.