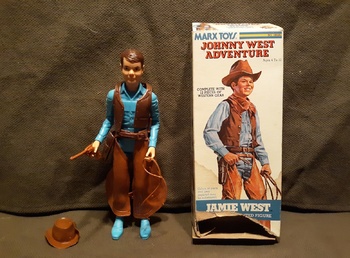 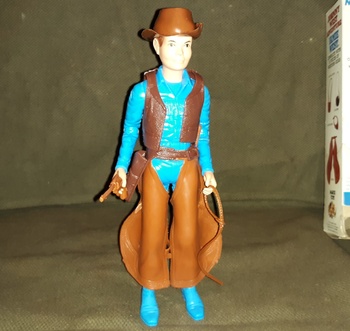 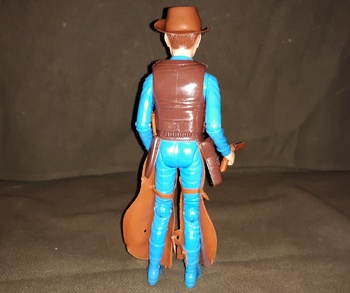 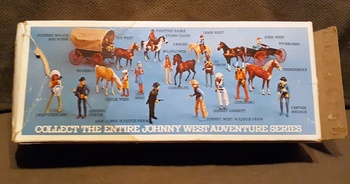 This may not seem like a big find but for a Johnny West collector this is huge. The Johnny West Adventures series figures and boxes are the most desired of the series. Those and some of the Canadian and other foreign figures that were molded in colors other than the standard.
This is Jamie West one of Johnny West's two sons. Normally he had a caramel colored body but in 1975 he was molded in blue. A good thing as the caramel colored figures are decaying and tend to be rather fragile. I have had several of the caramel colored ones fall apart on the shelf without being touched. These blue bodied Jamies are much tougher and much more rare. Even more rare is the box. These boxes. These boxes were glued shut so they got torn open to remove the figure. Thus the bottom front of this box is missing. It is actually in good shape for one of these boxes. The earlier boxes had a top and bottom. Very handy as the boxes could be used to store the figure and gear.
JWA Jamie also came with different colored gear than the previous version. In this case it is brown burt different shades than the previous version. These are dark brown and butterscotch while the previous accessories were a uniform medium brown. The JWA version came with half the accessories in one color and the rest in the other. So one needs to have a full set in both colors. Luckily Jamie also had two different bodies. This one is the fringe shirt version, the other has the shirt with the pearl snaps. So you display a complete set on two figures. I will have to check to see if I have two complete sets yet.
Plenty more exciting items to come so stay tuned as usual!