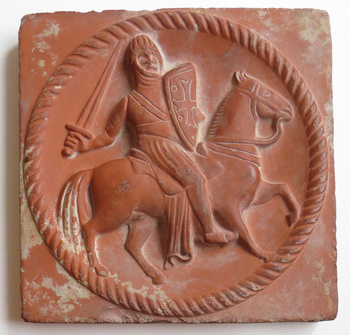 I'm hoping someone can help me solve the mystery of the Templar Knight red clay bas relief trivet tile! As despite searching over the years, I've never been able to figure out who actually made it. I bought it in downtown Vancouver in the early 1990's from a shop inside the now defunct old Vancouver Antique's Mall on Richard's Street & Hastings Street. It measures approx 6" x 6" and it's 1/2" thick. There's a pottery or maker's back-stamp but it's hard to read; best guess, the name starts with a letter "C" or "G". When I bought it, I was told it was mid-century British and had come off a fireplace surround. The design features a bas relief knight on horseback with a raise sword and a Templar cross on his shield, encircled by a rope twist molded band.