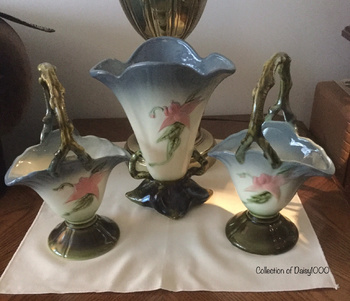 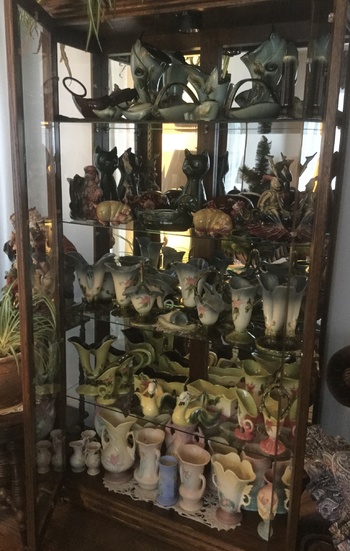 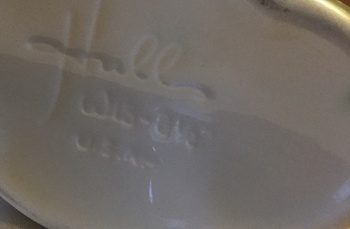 The Woodland Blue pottery items in these photos indicate almost all pieces produced for this line.

The A.E. Hull Pottery Company began operating in the huge white clay basin of Ohio in 1905. The company, located in Crooksville, started with four kilns, heated with natural gas. Though it initially produced stoneware and stoneware specialties, the company soon branched out and became an important producer of high quality ceramics.

By the 1920s, Hull had general offices and factories in Crooksville, a warehouse in Jersey City, NJ, New York offices and a showroom on Fifth Avenue. Despite challenges posed by overseas producers and the Great Depression, the company grew, purchased and absorbed other potteries, and prospered. In the forties, decorative vases and baskets — their “Art Ware” line —led Hull into its most fabulous decade.

The first catastrophe to befall the company was the flood of June, 1950. During a four hour downpour the Jonathan & Moxahala Creeks jumped their beds and flooded Crooksville Village with seven feet of water. The hot pottery kilns of Hull exploded and set the plant on fire, destroying it. Those that were there said hundreds of moulds could be seen floating in the creek. 350 were out of work.

Though many important moulds were lost forever, the company recovered to create sophisticated kitchenware and art designs throughout the fifties, sixties, seventies .... Yet, there were management, production, and environmental challenges, as well. The stability of the company was greatly compromised by numerous employee strikes. In August 1985, amid a multitude of problems, including the eighth strike, the most devastating being those with the EPA, the grand old pottery closed.

The items photographed for this post, which highlight the Woodland Blue line, are of Hull’s pre-fire “Art Ware” ... and post-fire replacement lines, to which High Gloss Woodland Blue belongs. These items are from my collection.